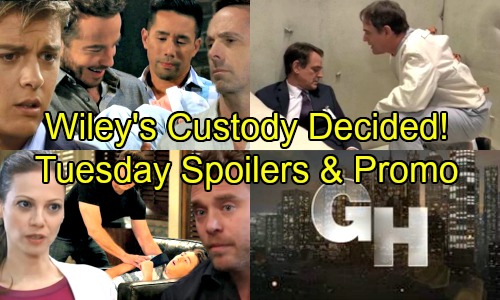 General Hospital (GH) spoilers for Tuesday, September 4, tease that Ryan (Jon Lindstrom) will put his plan in motion. After choking Kevin (Jon Lindstrom) until he loses consciousness, Ryan will trade places with the patient and play the part of Dr. Collins. Once Kevin’s in Ryan’s straitjacket, he’ll be stuck at Ferncliff with no way out.

Meanwhile, Ryan will waltz right into GH and happily begin his plot to wreak havoc. It should be fun to see what Ryan has in store! Jason (Steve Burton) will also take a trip to General Hospital on Tuesday. Oscar (Garren Stitt) just had a seizure and collapsed, so Jason will make sure he gets the proper help. He’ll eventually give Kim (Tamara Braun) and Liz (Rebecca Herbst) updates on this scary situation.

Kim will panic over Oscar and his uncertain condition. She’ll need Drew (Billy Miller) and Julian’s (William deVry) support soon, but they’ll be busy chatting for now. Julian will sit down for a crucial conversation with Kim’s ex. He’ll point out that Oscar would rather see Kim with Drew, but is that what Drew wants, too?

Julian will at least have to ask, but he should get reassurance. Drew doesn’t currently want to be with Kim, so he may grant Julian’s upcoming request. Since Julian wants to form a peaceful relationship with Oscar, Drew might offer to put in a good word for him. Of course, the news of Oscar’s medical crisis will put everything else on hold.

Other General Hospital spoilers say Cameron (William Lipton) will make his move. It’s clear that he’s got a thing for Josslyn (Eden McCoy), so he’ll try to rock the boat between Joss and Oscar. After Oscar’s late to see Josslyn in the park, Cam will hope to create some doubts. He’ll contend that Oscar shouldn’t be bailing on Josslyn when they’re about to celebrate their anniversary.

Cameron should feel terrible once the truth comes out. Oscar was delayed due to his apparent medical issues, so Cam and Josslyn are in for a shock. Over with Diane (Carolyn Hennesy), she’ll announce that the birth mom won’t be attending the custody hearing. Diane will insist that the mother had a change of heart and won’t be asking for her son back.

The judge will rule that Brad (Parry Shen) and Lucas (Ryan Carnes) are now “Wiley’s” legal parents, so that should leave them relieved. However, it won’t take long for Brad’s concerns to creep up again. He dodged one bullet, but there are more to come. Brad swapped dead Wiley with an alive Jonah, so that drama’s destined to explode sooner or later.

Alexis (Nancy Lee Grahn) will also deal with intense anger in Tuesday’s new GH episode, September 4. Will she find out that Julian contacted the birth mom? Alexis should be happy about the outcome, but she certainly won’t be happy about whatever plot Julian used to achieve it!