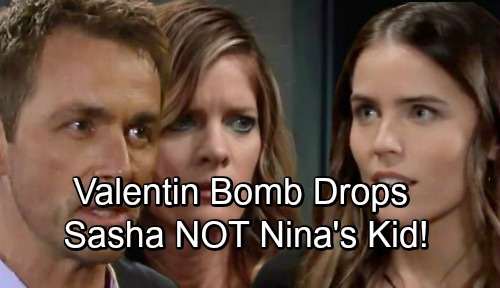 General Hospital (GH) spoilers tease that Nina (Michelle Stafford) will hope her second chance pans out. She was a babbling ball of nerves during her meeting with Sasha (Sofia Mattsson), but things still got off to a nice start. Unfortunately, Nina went overboard by urging Sasha to accompany her on a trip to Paris. She also managed to badmouth Sasha’s adoptive mom, which was the last straw.

Sasha nearly bolted from Port Charles, but Nina convinced her to stick around and meet her for breakfast. She just wants a shot at undoing the damage and forming a real relationship. However, it’s clear that Nina will be fighting an uphill battle. Sasha admitted that she only wanted to meet Nina for closure. She’ll probably feel like she’s betraying her adoptive mother by bonding with her birth mom.

Of course, the only mom Sasha’s ever known has passed on. Perhaps that could play a role in a change of heart. Sasha may determine that it couldn’t hurt to get to know Nina. There’s no one around to disapprove or advise against it. Sasha can tell that Nina really wants her in her life, so that has to mean something deep down.

Maybe Nina will indeed score herself a clean slate. If she can take this slow and stop being so pushy, she may have an opportunity to connect with Sasha. Nevertheless, GH fans are waiting on the other shoe to drop. Curtis (Donnell Turner) search for answers was relatively easy. It only took a few minor steps to track Sasha down. The DNA test results quickly confirmed Sasha as Nina’s daughter.

Something has to be up here. Soaps just don’t make long-lost children storylines this simple! Even James Patrick Stuart is waiting on some shocker to be revealed. In an interview with Soap Opera Digest, he admitted that people on set keep turning to him for answers he doesn’t have yet.

“There have actually been moments where various directors have run downstairs [onto the set] and said, ‘Are you aware of what’s coming up?’ because [the powers-that-be] are playing it so close to their vest,” Stuart said. There must be something huge brewing if General Hospital is being so secretive about this.

Stuart is betting Curtis won’t be too happy with him soon. He said he “told Donnell, ‘I have a feeling Valentin is gonna piss Curtis off pretty badly!’” Does that mean Valentin has deceived Nina and Curtis in some way? That’s one option to consider. Then again, Valentin might just make a mess of things in the future.

Either way, Sasha may not be Nina’s biological daughter. She might be her sister or another relative instead. There’s even a chance there was some trickery and they’re not related at all. General Hospital spoilers say the show has so much more to explore, so stay tuned.

Are you excited to see the inevitable twist ahead? GH may deliver some explosive drama that changes everything! We’ll give you updates as other news comes in. Stick with the ABC soap and don’t forget to check CDL often for the latest General Hospital spoilers, updates and news.