BY Sarah Luoma on August 20, 2018 | Comments: Leave Comments
Related : Reality TV, Recap, So You Think You Can Dance, Television, TV 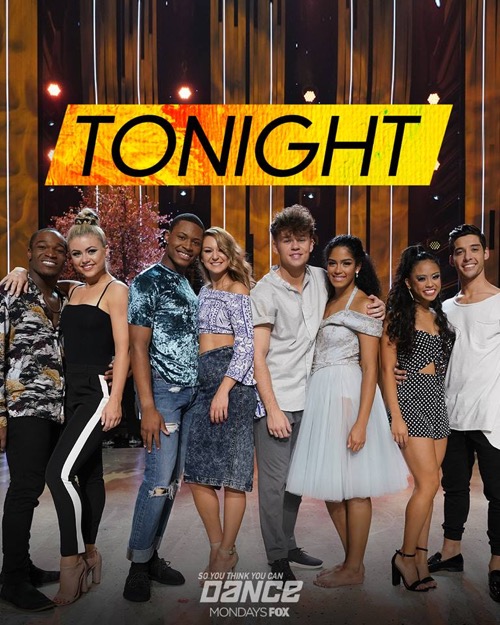 Tonight on FOX their Emmy-Award Winning So You Think You Can Dance premieres with an all-new Monday, August 20, 2018, season 15 episode 11 episode and we have your SYTYCD recap below!  On tonight’s So You Think You Can Dance season 15 episode 11 as per the FOX synopsis, “The Top 8 perform. Each dancer has another opportunity to impress the judges and fight for the nation’s vote after two said goodbye last week.”

The show opens with a performance by five of the male and female professional dancers choreographed by Christopher Scott. Cat comes to the stage to welcome the audience.  The Top 8 will all take the stage four more times tonight. Two more dancers will be leaving. Cat welcomes the judges: Mary Murphy, Vanessa Hudgens, Nigel Lythgoe and twitch.

Cat shows a clip of Jensen and Jay & Jay’s performance last week and what they have coming up a new jazz piece. They will play secret agents and lovers. It’s going to be a subtle sexy piece. They take the stage to I got You by Jessie J. Nigel likes the routine. He loved Jay Jay’s performance even though he knows this isn’t her style. Vanessa thought it was sexy, filled with character but a little clunky at times. Twitch thought they did great overall. Mary thinks less is more and they hit it just right.

It is time for the first solo of the evening. Cole takes the stage and dances to an Elvis Piece in a white t-shirt and black slacks.

Cat shows a clip of Slavik and Genessy’s week. The crowd loves their chemistry. They take the stage and dance to a love song. Vanessa loves how cute they are. Twitch is so impressed with them both. Mary thinks when they dance everyone can feel the love in the air. Nigel thinks they were great.

Hannahlei takes to the stage to perform her solo.

Magda and Darious share their week of rehearsals after falling into the bottom 4. They plan to kill it with some hip-hop. They take the stage, dancing to a song named Killa. Twitch thought it was full of energy but Magda didn’t execute as well as Darius. Magda shares that she did the best she could. Mary thinks she really tried. Darius has come along way. Nigel agrees the first time Magda was out of her comfort zone. Tonight, it didn’t really work for him. Vanessa agrees.

Slavik performs his solo. Cat shows clips of Hannahlei and Cole prepping for a Broadway piece. Hannahlei will try to pull Cole out of his funk in the piece. During the piece, she has to slap Cole’s butt. It took her a lot of tries to get it right. They take to the stage. The audience stands, clapping with excitement. Mary is happy. She loved Cole’s performance. Nigel thinks Cole was brilliant. Hannahlei made him happy. She can do everything. Vanessa agrees with what they all have been saying. Twitch thinks really stepped up his game.

Magda takes the stage to perform her solo. Geneseey and Slavik return to the stage with a hip-hop piece. Nigel loved the whole thing. He also loves the chemistry and wonders if they are engaged. Vanessa thinks they did great. Twitch loved the windmill arms. Slavik was a little ahead of the beat so he needs to control his pace. Mary thinks he is being tough. Mary screams with excitement.

Cat shows the clip of the week for Darius and Magda who are uses ropes as props. It signifies the push and pulls in a relationship. They take to the stage. Vanessa thinks it was a beautiful routine. Twitch loved the level of commitment. Mary thinks Magda was liquid grace. Darius was right on point with his character. Nigel thinks there were some magic moments but he thinks the choreographers really need to think about the concept and content. Darius didn’t really dance too much. Mary disagrees. Nigel wanted to see more.

They take the stage with a kitchen as a prop. The judges stand. The crowd goes wild. Twitch is thrilled. He loved it, it was full of energy and fun. They also gave glimpses into their own personalities. Nigel thinks Jay-Jay brought the juice. Nigel was also impressed with Jensen and points out that her sister is in the crowd. They should have their own reality show and they have talent!

Darius performs his solo. Hannahlei and Cole perform a duet with a cha cha. The theme is all about strangers in lust. They take the stage with a chair as a prop.  The audience is excited. Mary thanks them and welcomes them back to the show. It was really dramatic. She thinks they were hot hot hot. She screams. Nigel covers his ears. Nigel forgot what he was going to say. He thinks Cole was brilliant. It is his show tonight. Vanessa thought it was the sexiest cha cha. Twitch thinks it was too.

The Top 4 ladies return to the stage to dance together. Nigel thought it was a great routine. There were a lot of surprised. Magda did great for a genre she wasn’t familiar with. Vanessa agrees. Twitch thinks they were all fabulous. He urges everyone to vote. Mary is proud of all of them. It is time for some results. After America’s vote, two of them are safe, two are on the bottom. Cat calls Jensen, she is safe. Magda steps forward, she is in the bottom. Geneseey is also in the bottom. Hannahlei is safe. One of them will go home.

The four guys take the stage to dance in bright yellow raincoats with chairs. The hip-hop beat and routine have the judges standing. Vanessa thought they all brought it. Twitch thought it was amazing and incredible. Mary thought they all had a moment to shine in the routine. They all brought something to the table. Jay-Jay stood out to her tonight. Nigel thought Darius stood out for him. Less really is more. It is time for more results. Cat calls Jay-Jay. He is safe. Cole is in the bottom. Slavik is safe. Darius is in the bottom.

The bottom 4 come forward. Cole steps forward. Nigel tells him how great he was tonight. Nigel calls Darius. He has failed to connect with the audience. Nigel doesn’t know why Magda is in the bottom. As for Genessey, she has helped her partner and has great chemistry. He calls Cole and Magda forward. They will both be leaving.