The Bold and the Beautiful Spoilers: Bill’s Scheme Revealed But The Damage Is Done – Liam, Steffy, and Hope Rocked By Changes

BY hellodrdavis on May 24, 2018 | Comments: Leave Comments
Related : Soap Opera, Spoiler, Television, The Bold and the Beautiful 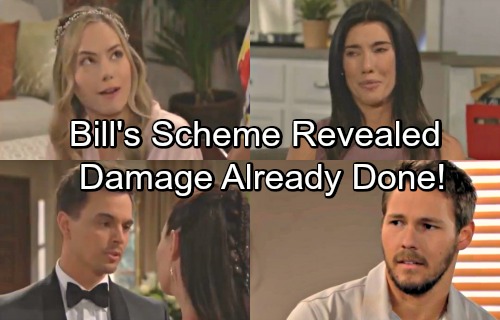 The Bold and the Beautiful Spoilers tease that Bill’s (Don Diamont) lies and deception will soon be revealed. It looks like a guilty Wyatt (Darin Brooks) will crack during Lope’s wedding and reveal to Liam (Scott Clifton) that Bill and Steffy (Jacqueline MacInnes Wood) really aren’t involved in an on-going affair.

That’s going to be a shocker for Liam, to say the least, and he’s going to have one heck of a decision to make: stick with his fiancé Hope (Annika Noelle) or go back to Steffy. Bill’s evil scheme will put Liam in this terrible position, which is bad enough. But perhaps the worst part of Bill’s scheme is that no matter which woman Liam chooses, it will have devastating consequences for Liam, Steffy, and Hope.

The first possible scenario is that Liam goes ahead and marries Hope despite learning the truth about Bill and Steffy. Steffy would of course be devastated, and a nuclear family would be broken. Hope might initially be thrilled, but wouldn’t it always be in the back of her mind that their relationship began based on a lie? And wouldn’t Hope always wonder whether Liam’s with her only out of obligation? Those would be tough questions to wrestle with on a daily basis.

Then there’s the possibility that Liam ditches Hope and goes back to Steffy. But could Steam really get back the happiness they once had? Steffy would have to deal with the fact that Liam believed Bill’s lies in the first place, and she’d always know that Liam so quickly proposed to (and slept with) Hope after annulling their marriage. There’s always the possibility that Hope will end up pregnant, too, which would make Steam’s relationship more complicated!

And no matter which woman Liam chooses, he’s going to have a lot of guilt over leaving the other one behind. Whichever couple ends up together will have a lot to deal with psychologically and will need to put forth some serious effort to get through the tough times ahead…all thanks to Bill and his devious scheme to possess Steffy.

However it plays out, these characters will be forever changed, and someone’s going to get hurt. Bill’s scheme is going to have far-reaching effects! Stay tuned to the CBS soap and don’t forget to check CDL often for the latest Bold and the Beautiful spoilers, updates, and news.