The Bold and the Beautiful Spoilers: Liam Confesses to Steffy, Reveals He Shot Bill – Steffy Begs Ridge for Desperate Cover-up?

BY Olivia Marie on March 8, 2018 | Comments: one comment
Related : Soap Opera, Spoiler, Television, The Bold and the Beautiful 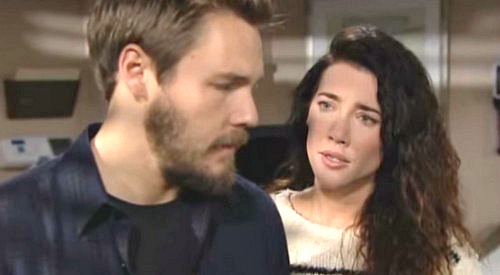 The Bold and the Beautiful (B&B) spoilers tease that Bill’s (Don Diamont) traumatic ordeal could lead to a lucky break for Steffy (Jacqueline MacInnes Wood). Let’s consider how this might play out. For starters, we should talk about the long list of suspects. B&B hasn’t been shy about setting up some likely shooters. The show’s been heavy-handed with clues along the way.

As Bill’s betrayed son and bitter enemy, Liam’s (Scott Clifton) obviously on the list. However, it seems like The Bold and the Beautiful has been focusing on other suspects lately. There could be a good reason for that. Perhaps they wanted to distract viewers a bit and make everyone believe Liam was innocent.

Katie (Heather Tom) called Liam to fill him in on Bill’s shooting, but his reaction was pretty blank. B&B’s left plenty of room for doubt. You could argue that Liam was in shock, but you could also argue that he didn’t really care. It’s certainly possible that Liam was playing dumb as well. He had plenty of time to go shoot Bill before he arrived for dinner with Steffy.

In fact, Liam’s decision to come could’ve been a last-minute attempt at an alibi. Liam seemed a bit anxious when he first showed up. We were meant to believe he had reservations about reconnecting with Steffy, but maybe he was just scared of getting caught.

Liam might’ve witnessed Bill proposing to Steffy and decided to confront him. Since Bill left his golden gun in plain sight, perhaps Liam just snapped and fired. He may not have planned on shooting his dad, but how could he resist in an enraged state with a weapon nearby?

It’d actually be nice to see this goody-goody character do something so drastic. It’s reasonable after everything Liam’s been through. If Liam indeed shot Bill, what happens next? That’s where things could turn around for Steffy. Liam might admit the truth to her at some point and score a loyal partner in crime. Steffy could recruit Ridge (Thorsten Kaye) to pin the murder on someone else.

Sheila (Kimberlin Brown) would be a great option since she probably won’t be sticking around for too much longer. Plus, her track record would make her an easy target. Ridge would do anything to make Steffy happy, so maybe The Bold and the Beautiful will take this route.

Liam might let this happen for the sake of his daughter. He wouldn’t want his little girl to grow up with an incarcerated father. If Steffy can prove her loyalty by helping Liam beat the rap, perhaps it could spark a reunion.