The Bold and the Beautiful Spoilers: Huge Comeback Shockers – 4 Ways Hope Will Shake B&B Up

BY Marcy Cohen on January 3, 2018 | Comments: one comment
Related : Soap Opera, Spoiler, Television, The Bold and the Beautiful 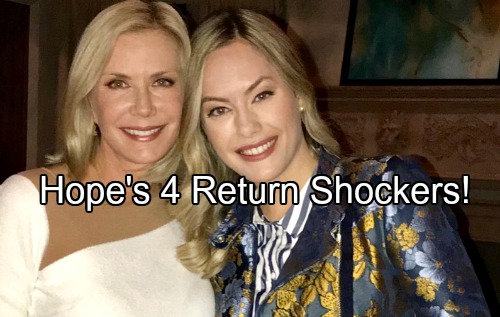 The Bold and the Beautiful (B&B) spoilers tease that Hope’s (Annika Noelle) return will bring some interesting drama. B&B fans can probably expect some slight changes in Hope’s personality. The show will naturally let Noelle give this character her own flavor. It should be fun to see what Hope’s like this time around.

Hope will stir the pot and get involved in some current storylines. The Bold and the Beautiful spoilers say Hope will butt in the business of other characters and make a new path for herself. Let’s look at a few of the ways that Hope will shake things up.

Sally (Courtney Hope) has disappeared lately, but Liam (Scott Clifton) and Steffy’s (Jacqueline MacInnes Wood) conflict will catch her attention. She’ll be ready to sniff around Liam again, but here comes Hope! She’ll do her best to protect Liam while he deals with his heartbreak. Of course, Sally won’t be afraid of Hope’s threats. She’ll fire back with some of her own, so expect some scheming.

If Hope wasn’t coming back in the picture, “Steam’s” reunion chances would be far greater. However, Hope’s pull will be strong. Liam and Hope’s relationship ended with a fizzle instead of an explosion. Reuniting could be easy, especially since Liam will have a hard time moving past Steffy’s betrayal.

3. Brooke gets a confidant

Now that Hope’s going to be in town again, you can bet that she’ll listen to Brooke’s (Katherine Kelly Lang) troubles. If Brooke finds herself torn between Thorne (Ingo Rademacher) and Ridge (Thorsten Kaye), Hope can offer her opinion. She won’t hesitate to give her mom advice once a crisis hits. Hope could alter Brooke’s future, so that’s definitely a shakeup to consider.

Since Hope will be feuding with Sally, she may not find any employment opportunities at Spectra Fashions. Spencer Publications isn’t a good fit with Hope’s specific skill set. Everything’s too tense with Bill (Don Diamont) now anyway. That might mean Hope will land at Forrester Creations, so the workplace dynamic could be shifting. Hope’s presence could certainly make Steffy uncomfortable.

Welcome @annikanoelle to the family!! So great to have you with us at @boldandbeautifulcbs ! So happy to have you as my daughter😃👍🎉💖👯 #boldandbeautiful #cbsdaytime #HopeLogan #tvfamily And thank u @jacob_w_young for taking this pic of us! U should have been in the pic too! 😆