BY Heather Hughes on September 17, 2018 | Comments: one comment
Related : Soap Opera, Spoiler, Television, The Bold and the Beautiful 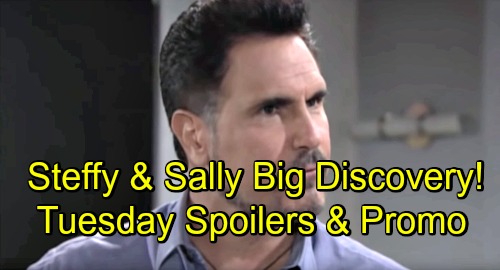 The Bold and the Beautiful (B&B) spoilers for Tuesday, September 18, tease that Bill (Don Diamont) will get some infuriating news. He’ll hit the roof over Thorne (Ingo Rademacher) and Katie’s (Heather Tom) engagement, so Justin (Aaron D. Spears) will try to settle him down. Since Justin knows how Bill can be, he’ll warn his boss not to do anything crazy. It’s best to just stick to the plan here.

Justin will push Bill to focus on the Brooke (Katherine Kelly Lang) angle. He’ll think if Brooke can convince Katie to drop the custody case, it’ll be the ideal solution for everyone. However, Bill will have doubts about that strategy. It hasn’t worked so far, so Bill will consider other options. If he has to get nasty in court, he’ll be willing to do that. There’s too much at stake for Bill to just back off.

B&B spoilers state that Bill will struggle to control his anger. Thorne’s involvement will be particularly maddening. Despite Justin’s attempts to reason with him, Bill will make it clear that he won’t stand for this. He’ll refuse to let Thorne have a say in his son’s life, so expect this custody battle to get ugly.

Meanwhile, Pam (Alley Mills) will be excited for Will (Finnegan George) and the family that’s forming. She’ll gush about Will getting a new stepdad, so she’ll obviously be happy about Thorne and Katie’s engagement. Pam will just hope that Bill doesn’t cause too many problems. She’ll believe Will deserves peace and happiness, not the vicious war he could get caught in.

Other Bold and the Beautiful spoilers say Steffy (Jacqueline MacInnes Wood) and Sally (Courtney Hope) are in for a shock. They’ll spot Xander (Adain Bradley) in a very revealing situation, so it sounds like he’ll be at least partially naked. Xander will face some embarrassment, but this awkward ordeal will actually work out well. He’ll ultimately score a modeling gig for Steffy’s intimates line.

The Bold and the Beautiful spoilers hint that as Steffy’s line builds into a success, Hope will become increasingly outraged. B&B viewers won’t want to miss their next showdown, which is coming up later this week. We’ll give you updates as other B&B details emerge. Stay tuned to the CBS soap and don’t forget to check CDL often for the latest Bold and the Beautiful spoilers, updates and news.