The Bold and the Beautiful Spoilers: Week of April 23-27 – Devastating News, Sneaky Plans and Fierce Confrontations

BY Heather Hughes on April 21, 2018 | Comments: one comment
Related : Soap Opera, Spoiler, Television, The Bold and the Beautiful 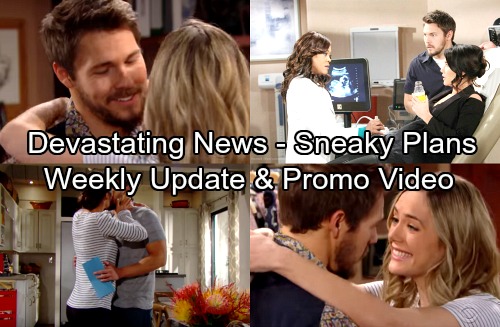 The Bold and the Beautiful (B&B) spoilers for the week of April 23-27 tease that plenty of relationship drama is on the way. For starters, Steffy (Jacqueline MacInnes Wood) will be devastated over Liam’s (Scott Clifton) refusal to reunite. He’ll insist that he can’t come home and pretend her betrayal never happened.

Steffy will just have to accept that for now, so she’ll face some rough moments. Meanwhile, Hope (Annika Noelle) will gain the upper hand. She’ll urge Liam to move in with her, so he’ll mull it over and get on board.

Later, Wyatt (Darin Brooks) will get updates on Liam’s decision. He’ll wonder if it’s a good idea for Liam to get so close to Hope right now. Wyatt may suspect that Liam isn’t ready to let go of Steffy. The Bold and the Beautiful spoilers say Ridge (Thorsten Kaye) will have concerns as well, but he won’t be as nice about sharing them! He’ll get into a heated argument with Brooke (Katherine Kelly Lang) this week.

Brooke will admit that she had some initial reservations about Hope’s pursuit of Liam. However, she’ll feel like she has to support her daughter. Brooke will start to believe Hope might be right. Perhaps it really is better for everyone to just move on.

Ridge certainly won’t agree with that, so he’ll try talking some sense into Liam. The Bold and the Beautiful spoilers state that they’ll have a deep conversation. Ridge will probably hope to guilt-trip Liam into getting back together with Steffy. He’ll inevitably play the baby card and urge Liam to keep his family united.

Elsewhere, Steffy and Hope will have a fierce faceoff. B&B fans can expect Liam to join them eventually. He might try to settle them both down, but this feud isn’t going away anytime soon. Nevertheless, it’ll be time for Steffy’s ultrasound appointment. Liam will visit Dr. Phillips (Robin Givens) with her, but they won’t get the positive news they were hoping for.

Steffy and Liam will be warned about the possibility of a miscarriage. The Bold and the Beautiful spoilers say all the love triangle stress has been too hard on the baby. While Liam and Steffy connect over their fears, Hope will get a lecture from Ridge. She’ll stand her ground and insist that she’s the right woman for Liam.

Finally, Bill (Don Diamont) will get back to scheming. He’ll come up with a plan to keep Liam and Steffy apart for good! We’ll keep you posted as other B&B details emerge. Stick with the CBS soap and don’t forget to check CDL often for the latest Bold and the Beautiful spoilers, updates, and news.