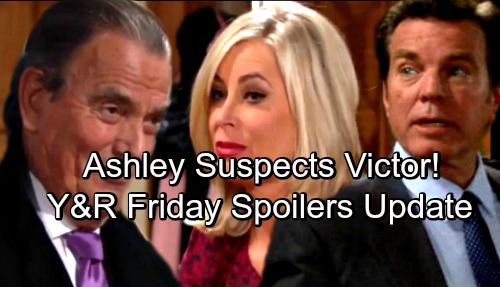 The Young and the Restless (Y&R) spoilers for Friday, May 11, tease that Kyle (Michael Mealor) will stop by the ranch. He won’t find Victor (Eric Braeden), so he’ll take the opportunity to blast Nikki. After she talks about the time Dina stabbed her, Kyle will lash out over his mother’s death. He’ll insist that Nikki got away with Diane’s (Maura West) murder.

At home, Nick (Joshua Morrow) and Sharon (Sharon Case) will lean in close. Mariah (Camryn Grimes) will interrupt, so they’ll hide their steamy connection. After Sharon sends Mariah off on an errand, Sharon and Nick will get back to business. They’ll make out and start unbuttoning their clothes, but they’ll face another interruption.

Nikki will appear at the door with some important news. After she mentions the scrapped garden ceremony, Nikki will push Sharon to discuss charity details. They’ll leave for a private conversation elsewhere. Once the coast is clear, Nikki will get emotional about Nick’s search for J.T. (Thad Luckinbell). Sharon will wonder why Nikki’s suddenly so upset.

Nikki will admit that Kyle brought up Diane’s death and it left her unsettled. Sharon will offer reassurance before Nick catches up with them. He’ll sense that something’s wrong, but Sharon will blame it on Victoria (Amelia Heinle) missing Mother’s Day. Afterward, Mariah will meet back up with Sharon to hand over a gift and express her love.

Y&R fans will also see a Mother’s Day celebration for the Ashbys. Lily (Christel Khalil) will enjoy a fun brunch with the fam. Over with Hilary (Mishael Morgan) and Devon (Bryton James), they’ll chat about their love lives. Neither one of them will plan on dating anytime soon. When talk turns to Mother’s Day, Devon will hope Hilary gets to take part in the celebration next year.

Other Young and the Restless spoilers say Ashley (Eileen Davidson), Traci (Beth Maitland) and Abby (Melissa Ordway) will spend some time with Dina (Marla Adams). She won’t recognize Traci, so that’ll be a tough blow. When Jack (Peter Bergman) walks in, he’ll announce that he’s got another DNA test in the works.

Since Jack’s sure Billy (Jason Thompson) is John’s (Jerry Douglas) son, the lab’s testing Jack’s DNA against Billy’s. Once Kyle comes in, Abby (Melissa Ordway) will rant about the leaked footage. Kyle will assure Abby that he didn’t expose this secret. He’ll suggest he found the clip, but he wasn’t behind the screening fiasco. Later, Abby will consider the possibility that Victor’s to blame.

Jack will have some harsh comments for Dina, but a special moment will melt away the tension. The Young and the Restless spoilers say Dina will remember who Traci is. The memory will be brief, but it’ll mean a lot to the Abbott clan. Jack will ultimately offer an apology to Dina and wish her a happy Mother’s Day.

It sounds like Y&R has a fantastic episode in store. We’ll give you updates as other details emerge. Stay tuned to the CBS soap and don’t forget to check CDL often for the latest Young and the Restless spoilers, updates, and news.