The Young and the Restless Spoilers: Jack’s Risky Plan to Retake the Throne – Brother Battle Reignites as Jack Plots Against Billy

BY Kinsley Goldman on May 15, 2018 | Comments: Leave Comments
Related : Soap Opera, Spoiler, Television, The Young and the Restless 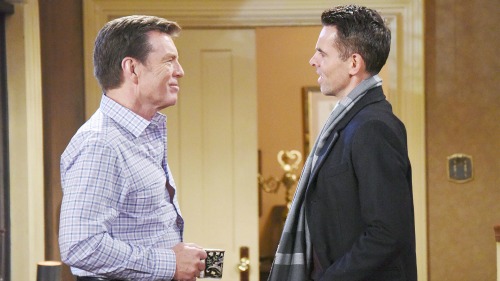 The Young and the Restless (Y&R) spoilers tease that Jack (Peter Bergman) will spin out and hit a low point. He’s in bad shape thanks to the DNA test that confirmed his worst fears. Jack will get in the car after guzzling plenty of alcohol and popping several pills. He’ll crash the vehicle, but will that be enough to stop his downward spiral?

Jack recently learned he’s not John’s (Jerry Douglas) son and that’s not something he can deal with in just a few days. This kind of pain runs deep, so Jack needs time to mourn his blood-Abbott status. There’s a good chance Jack will be hospitalized following his car accident. Whether he sustains serious injuries or simply gets a little banged up, his family will be quite concerned.

Of course, Jack may be too upset to care about his wounds or the fact that he worried his loved ones. This ordeal may not be enough to settle Jack down. Once he’s recovered from the crash, Jack may get right back to risky behavior. Y&R fans know that doesn’t always mean taking pills and drinking booze. There are many other ways to create trouble on The Young and the Restless.

Since Billy (Jason Thompson) steps up as Jabot’s CEO on Tuesday  that’ll be a tough blow for Jack soon enough. He’s the one who put the blood-Abbott clause in place, so he brought this on himself. Like Jack mentioned, this seems like karma for how he treated Ashley (Eileen Davidson). What goes around often comes around – especially on a soap!

Nevertheless, it’ll still be hard for Jack to give up the throne. When he gets updates on Billy’s rise to the top, Jack may lash out at his brother. Billy has the power to call another vote and get rid of the blood-Abbott clause. He may drag his feet on that thanks to Jack’s car accident. That certainly won’t do any favors for Jabot’s public image.

Billy may feel like he needs to stay in control until things quiet down. Naturally, Billy’s power could go to his head as well. Jack may declare war on his brother eventually. He might even be willing to team up with Victor (Eric Braeden) if it means sticking it to Billy. Jack may decide that if he can’t be the top dog at Jabot, he needs to join the dark side and sabotage the company.

Perhaps Jack will want to sink Jabot so he can be the guy to ultimately save it. If this is Jack’s plan to regain control, it could be awfully dangerous. That’s always the case when Victor’s involved. Trying to dupe Vic could be a terrible idea! The Young and the Restless spoilers say some hot drama’s looming, so stay tuned.

Are you excited to see where this storyline heads next? We’ll keep you posted as other Y&R news comes in. Stick with the CBS soap and don’t forget to check CDL often for the latest Young and the Restless spoilers, updates, and news.