The Young and the Restless Spoilers: Mariah Kidnapped – Baddies Hit Tessa Where It Hurts? 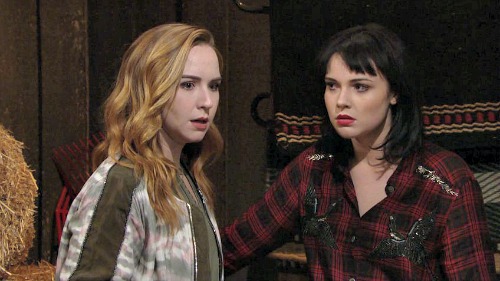 The Young and the Restless (Y&R) spoilers tease that more danger could be headed for Tessa (Cait Fairbanks). Unfortunately, Mariah (Camryn Grimes) could get caught in the next round of it. Tessa’s story of smuggler baddies has been suspicious and confusing, but there does seem to be a real threat.

Let’s recap what we know so far. Tessa was ready to leave GC behind for good and be with her sister, but she genuinely wanted Mariah to run away with her. That tells us the story about helping Crystal (Morgan Obenreder) was true. Any deception would’ve been discovered if Mariah had tagged along.

Tessa initially insisted that she had to leave permanently. She argued that it would put Mariah at risk to come back, but she later did it anyway. We’ll chalk that up to love winning out. Maybe Tessa just decided she could handle any looming drama.

Some Y&R fans out there still think Tessa’s a con artist, but that doesn’t make much sense. Tessa’s lied and stolen before, but it was always about protection. Whether she was protecting the people she loves or the music career she’d always dreamed of, it wasn’t about making a quick buck. We also watched Tessa struggle with guilt as she was pulling those stunts.

Besides, Tessa has repeatedly turned down Mariah’s cash. She’d probably be finding a richer mark and actually taking the money if she wanted to con someone. Instead, Tessa’s working her butt off to pay these mysterious bad guys. She even got some nasty bruises in an attack, which Nate (Brooks Darnell) confirmed. Tessa was rattled alone at Dark Horse later, so that corroborates her story.

It appears Tessa really needs $20,000 to get this threat off her back. However, that doesn’t mean she’s sharing all the facts. It’s possible Tessa has a history with these baddies. Perhaps this involves her lowlife father or some ex she doesn’t want to talk about.

Regardless, The Young and the Restless introduced a danger element with that scuffle at Crimson Lights. Now they’ve got to raise the stakes. Mariah’s worried that the smugglers will eventually just get rid of Tessa. That probably won’t happen since that’s a surefire way not to get their payment!

The most logical option would be to hit Tessa where it truly hurts. Killing Tessa won’t solve anything, but harming or kidnapping Mariah? That’s another story entirely. Tessa would be motivated to come up with the cash immediately. It might be the only way for these guys to get what they want.

If Mariah is abducted or seriously injured, Tessa could definitely get money from someone like Devon (Bryton James), Kyle (Michael Mealor) or Nick (Joshua Morrow). Whatever happens, The Young and the Restless spoilers say this storyline will bring some perilous twists. Let’s hope that if chaos strikes, it’ll at least make people believe Tessa’s version of events!

Are you anxious to see what’s ahead in this hot plot? Is all this building to extreme danger for Mariah and Tessa? We’ll give you updates as other Y&R news comes in. Stay tuned to the CBS soap and don’t forget to check CDL often for the latest Young and the Restless spoilers, updates and news.