BY Heather Hughes on May 25, 2018 | Comments: one comment
Related : Soap Opera, Spoiler, Television, The Young and the Restless 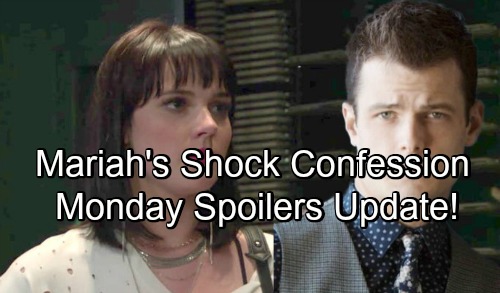 The Young and the Restless (Y&R) spoilers for Monday, May 28, tease that Faith (Alyvia Alyn Lind) will get big news from her parents. Sharon (Sharon Case) and Nick (Joshua Morrow) will admit that they’ve reunited, but Faith won’t exactly be thrilled. She’ll argue that they’ve been down this road too many times. Faith will suggest that they’d be better off sticking with friendship.

It’ll take some work, but Nick and Sharon will convince Faith to give their relationship a chance. Meanwhile, Jack (Peter Bergman) will scold Kyle (Michael Mealor) for refusing to leave Jabot with him. Kyle will argue that he wasn’t obligated to go along with Jack’s idea. He’ll think Jack’s to blame for making assumptions.

Later, Kyle will fill Victor (Eric Braeden) in on his decision to stick with Jabot. He’ll hope there’s still a place for him at Newman when this is all over. The Young and the Restless spoilers say Victor will praise Kyle for making the right choice. At Hamilton-Winters, Charlie (Noah Alexander Gerry) and Shauna (Camryn Hamm) will share a kiss. Things are really heating up for these teen lovebirds.

At The Dive Bar, Neil (Kristoff St. John) will throw a Memorial Day bash. Unfortunately, the catering company will cancel at the last minute. Hilary (Mishael Morgan) will save the day by recruiting Mariah (Camryn Grimes), Tessa (Cait Fairbanks) and Devon (Bryton) for barbeque duties. Mariah will make Hilary help out as well, so it’ll be a real team effort.

When Kyle spots Tessa, he’ll get flirty and drop more hints about going out. Tessa will once again decline. She won’t feel like it’s a good idea to date Mariah’s pal. Later, Kyle will mention Tessa’s reason to Mariah and get a surprising explanation. Y&R spoilers say she’ll fill Kyle in on her one-sided crush, but he won’t buy it. Kyle will think Tessa seems interested in Mariah, so something could be brewing.

Sharon will also take note of Tessa and Mariah’s warm moment. She’ll bring it up to her daughter, but Mariah will insist that she’s just trying to leave the past behind. Over with Jack, he’ll lash out at Kyle again and exchange harsh words with Victor. Neil will walk over to send them to their corners and get the party back on track.

Other Young and the Restless spoilers say Nick will have important updates to pass along. He’ll share his Newman comeback shocker with family and friends. A proud Victor will buy a round of drinks for everyone and take a microphone to announce Nick’s return.

Afterward, Victor will adjust a press release to make Nick the new COO. He’ll fib about Victoria deciding she wants to head down a different path. Nick will accept his father’s statement as fact, but he’ll find out he’s wrong soon enough. Victoria will be ready for a fierce fight on Tuesday, so stay tuned.

It sounds like the excitement’s revving up in Genoa City. We’ll keep you posted as other Y&R details emerge. Stick with the CBS soap and don’t forget to check CDL often for the latest Young and the Restless spoilers, update and news.