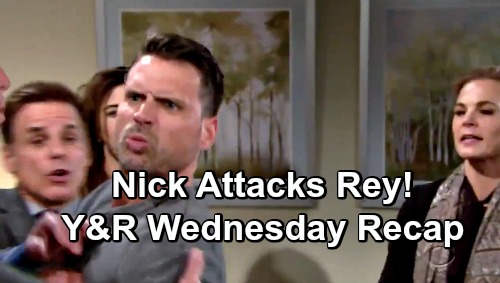 The Young and the Restless (Y&R) spoilers for Wednesday, December 19, tease that Reed (Tristan Lake Leabu) and Charlie (Noah Alexander Gerry) will form a plan. They’ll decide to scrape enough cash together to fix the car dent for cash. When Reed wavers on the cover-up, Charlie will point out that Lily (Christel Khalil) confessed and went to prison. He’ll think Reed would be crazy to come clean.

Mattie (Lexie Stevenson) will catch the guys arguing and wonder what’s up, but they’ll blame their fight on sports. Afterward, Reed will agree to keep his mouth shut about hitting Nikki (Melody Thomas Scott). At the athletic club, Fen (Zach Tinker) will bug Devon (Bryton James) about his demo. He’ll get scolded since he’s paid to wait tables, not push his music.

Next, Kyle (Michael Mealor) will arrive and give Fen a hard time. They’ll be bickering when Ana (Loren Lott) walks over and gives Fen some advice. She’ll think he just needs to cool it with Devon and he’ll have a real shot. Ana will even offer to record a new demo for Fen, but he’ll reject the idea. Fen would prefer someone with more experience in the industry, so Ana will leave in a huff.

Kyle will call Fen stupid for blowing a great opportunity, but Fen will try to undo the damage. He’ll stop by Devon’s penthouse later to apologize to Ana. Fen won’t know if he has enough money for another demo, but Ana will suggest she can take care of that. As long as Fen gives her a dynamite performance, they can make this happen.

Other Young and the Restless spoilers say Nikki (Melody Thomas Scott) will need an MRI. Nate (Brooks Darnell) will believe that’ll allow for a more accurate diagnosis. He’ll be able to judge Nikki’s survival chances when he gets the results.

Meanwhile, Nick (Joshua Morrow) will worry that Victor (Eric Braeden) won’t make it back before Nikki dies. He’ll fret over his mom’s drinking and all the pressure Rey (Jordi Vilasuso) put on her. Victoria will naturally be on edge as Nick rants about the J.T. (Thad Luckinbill) investigation.

Soon after, Y&R spoilers say Jack (Peter Bergman) will check in. He’ll acknowledge that Victor can be self-centered at times, but he won’t think he’d just bail on Nikki. Jack will feel like something could be terribly wrong. At the police station, Rey will explain the Nikki situation to Sharon (Sharon Case) and add that Victor has a choice to make. He can keep his freedom or come home to Nikki.

Next, Sharon will meet up with Phyllis to debate the cause of Nikki’s accident. She’ll fear that the same person who planted J.T.’s clothes ran Nikki down. Back at the hospital, Rey’s presence will infuriate Nick. The detective will be investigating the hit-and-run, but Nick won’t want him on this case. He’ll nearly attack Rey after a negative comment about Victor, but Michael (Christian LeBlanc) will stop him.

Back with Sharon, she’ll reconvene with Phyllis and add Victoria to the meeting. They’ll discuss the potential link between the accident and the J.T. investigation. Phyllis will wonder if someone’s trying to kill them all! They cover-up crew will definitely be nervous about what else might be brewing.

Finally, Kyle (Michael Mealor) will reveal his plan to Jack (Peter Bergman). He’ll want to recreate the beach at home and give Lola (Sasha Calle) a little taste of Miami. As for Jack, he’ll admit he’s got something special cooking for Kerry (Alice Hunter) as well.