The Young and the Restless Spoilers: Week of November 12 Preview – Billy and Sharon Get Steamy, Phick Fumes at Launch Party

BY Kinsley Goldman on November 8, 2018 | Comments: one comment
Related : Soap Opera, Spoiler, Television, The Young and the Restless 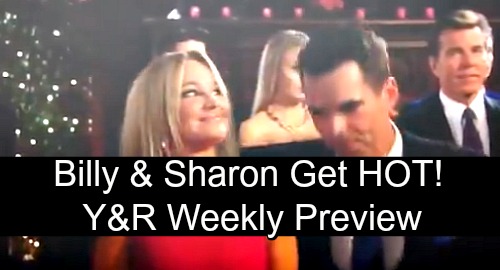 The Young and the Restless (Y&R) spoilers for the week of November 12-16 tease that some surprises are in store. Many of them will be unpleasant ones, so several Genoa City residents will have to go with the flow. For starters, Rey (Jordi Vilasuso) will have mixed feelings when his estranged wife shows up. That’s a problem since Rey’s feelings for Sharon (Sharon Case) are growing.

Mia (Noemi Gonzalez) will insist that she missed Rey and wants to work things out. She’ll be committed to the task, but it won’t be long until a war begins. Mia will realize she’s got some competition, so she’ll make her position crystal clear. During a confrontation with Sharon, Mia will declare that Rey’s hers. She’ll inform Sharon that it’s time to back off.

Fortunately, Sharon will indeed get a distraction this week. It’ll come thanks to her fellow Broken Hearts Club member. Billy (Jason Thompson) will form a plan to get under Phyllis’ (Gina Tognoni) skin. He’ll think it’ll drive Nick (Joshua Morrow) nuts as well, so he’ll urge Sharon to join in. The plot will only work if Sharon’s involved, but she’ll be hesitant to accept his offer.

The Young and the Restless spoilers say there’s a big party coming up. It’ll be a bash to launch the new Jaboutiques, which were Billy’s brainchild. The fact that Phyllis is stealing the spotlight will be bad enough, but Billy will also fume over her date. Phyllis will note Nick’s going to be her plus one. She’ll contend that Billy’s welcome to bring anyone he chooses, but she’s not going to like his pick!

That’s where Sharon will come in. Despite her initial reluctance, she’ll eventually get on board the jealousy train. The Young and the Restless spoilers say Billy and Sharon will put on quite a show. They’ll just be doing this to stir up some envy and give as good as they get. However, it’s possible real feelings will develop at some point. Sharon and Billy have some chemistry, so you never know.

Of course, Y&R fans will also see more J.T. (Thad Luckinbill) drama. Rey will call Victoria (Amelia Heinle) down to the station and force her to answer more questions. That’ll leave Sharon and the others on edge. Rey’s closing in on the truth, so it’s just a matter of time until the clues come together.