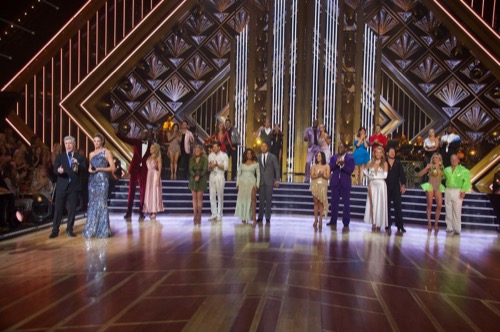 Tonight on ABC the glitz and the glimmer returns to the ballroom as Dancing With The Stars when season 28 episode 2 of DWTS airs! We have your all-new Monday, September 23, 2019, season 28 Week 2 “First Elimination” Dancing With The Stars recap below! On tonight’s DWTS Season 28 episode 1 as per the ABC synopsis, “The 12 celebrity and pro-dancer couples compete a second week with the first elimination of the 2019 season. Vying for America’s vote, each couple will dance to a style they have not yet danced to this season.

Some of the songs featured in the season’s second episode will include Taylor Swift’s “Lover,” Demi Lovato’s “Confident,” Frank Sinatra’s “Fly Me to the Moon,” The Goo Goo Dolls’ “Iris,” Aretha Franklin’s “Think” and Earth, Wind & Fire’s “September,” among others. The show opens with a comedic cold open featuring celebrity contestant Ray Lewis giving one of his infamous locker room pep talks to his fellow celebrities in advance of the first elimination.”

Tonight on Dancing with the Stars the 12 celebrity and pro dancers face elimination. First up James Van Der Beek and Emma, they are dancing the “cha-cha”. James and partner Emma do a great job landing each step percise. Judge Len felt as if it was too gimmicky and wanted more dancing,judge Bruno loved it, judge Carrie-Ann noticed James missed a step but noted he bounced back and it was a good performance their scores totaled up to a 20 out of 30. Up next Sailor Brinkley-Cook and partner Val dancing the Latin Rumba, judge Bruno feels Sailor moves had no intensity and feeling and that she didn’t connect with the dance. Carrie-ann senses she’s uncomfortable with the sensuality of the dance and Len feels her feet moves could’ve been smoother their score is a 18. Next Ray Lewis and partner Cheryl dancing the Fox Trot,it’s fun energetic and they are in character with their playful gestures, even tho it was fun to watch the judges say the technicality part of the dance was off and full of mistake and it’s the charisma of Ray that saves the performance their score is 15.

Up next is Ally Brooke and partner Sasha dancing Viennese Waltz, it’s a slow and emotional dance. Judge Len sad Alley didn’t know how to move her feet even tho it was pretty to look at he’s judging on technical steps, Bruno disagrees and says it was good and to work on her posture, Carrie-Ann embraces Alley as she’s crying to tell her she did good their score is a 20. Up next Mary Wilson and partner Brandon dancing the cha-cha, it seemed a little stiff on Marys end but all the judges love it their score 15. Next up is Lauren Alina and partner Gleb dancing the judges feel she needs to be consistent it was good, judge Len wanted more twists and turns, Bruno loved the dance and feels she came out of her shell their score 19. Next up Sean Spicer and partner Lindsay dancing the Tango, surprisingly it was good and the judges agree it was better than last week’s performance,and it actually looked like a tango and that the pair worked together united as a team ,their score 16.

Next is Karamo and partner Jenna dancing the Quick step, it’s a fast high paced dance energetic from both dancers. Judges Bruno and Carrie-Ann felt it was full of flair, confidence and needed more body contact,Judge Len tho felt it wasn’t good and was too fast and he didn’t connect their score 19. Next Kate Flannery and partner Pasha dancing Foxtrot, it’s a soft and light dance. Judge Carrie-Ann says it’s amazing and so was her technique,Len liked all aspects the costume,her technique, and she did wonderful, Bruno loved it as well their score 21 highest score yet for the night. Next is Kel Mitchell and partner Witney dancing the Samba. It’s a hip hop samba danced to Bobby Brown s “Every Little Step”, the dancers connected had great chemistry and had rhythm, all the judges agreed as well and said it came off natural and smooth, their score 20

Next Lamar Odom and partner Peta dancing the Salsa. Lamar seems a bit stiff on stage the judges feel was better this week and that his partner took more control in the dance all the judges agree it was better and needs to build his confidence, their score a low 12. The last dance is Hannah Brown and partner Alan doing the Viennese Waltz it was a sweet ad flirty dance, judges agreed their movement were Swift and confident judge Len called it the best dance of the night, their score 24 beating out the previous couple for highest of the night. The bottom two are Ray Lewis and Mary Wilson…the eliminated team is Mary Wikson and partner Brandon.