Days of Our Lives Spoilers: Ben Found Bloody and Unconscious After Battle for Ciara’s Freedom – More Cin Shockers Ahead 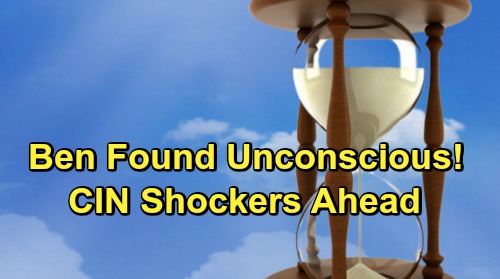 Days of Our Lives (DOOL) spoilers tease that Ben Weston (Robert Scott Wilson) and Ciara Brady (Victoria Konefal) will do what they do best – come to each other’s rescue! Ciara’s drug cartel drama will make Ben a nervous wreck over the next few episodes. Hope Hernandez (Kristian Alfonso) will assist Ben as they try to secure Ciara’s freedom, but it’ll be a tough battle.

Fortunately, Ben’s love for Ciara can conquer just about anything. It’ll give him the strength to keep fighting since there’s just no other option. Ben feels like he can’t live without Ciara, so he has to keep her alive and well. Of course, Days viewers know this is an incredibly dangerous situation. Ben will be walking into a war zone as he faces off with the deadly associates of El Fideo (Andoni Gracia).

Days of Our Lives spoilers say Ben will save the day on April 22. Sadly, he’ll land in harm’s way in the process. Ben will end up bloody and unconscious after this showdown, so Ciara will fear the worst. When she finds Ben in this terrible state, she’ll hurl herself on him and listen for his heartbeat.

Thankfully, it seems Ben’s ticker will be going strong. He’ll ultimately awaken, get the help he needs and share a wonderful reunion with his love. Ciara will be thrilled to know they still have a shot at being together. If these two were cats, they would’ve already burned through their nine lives by now! Ciara and Ben should be glad that DOOL grants infinite chances and lucky breaks.

Days of Our Lives spoilers say Ben will be a bit banged up, but he’ll be on the mend soon enough. He won’t have any serious injuries, which is great since his hot night with Ciara was recently interrupted. They were all set to make love, but they were forced to delay that special occasion.

However, Ciara and Ben will indeed hit the sheets on April 26. It’ll be a magical moment for them, so “Cin” fans should be left swooning. We’ll give you updates as other Days news comes in. Stay tuned to DOOL and don’t forget to check CDL often for the latest Days of Our Lives spoilers, updates and news.