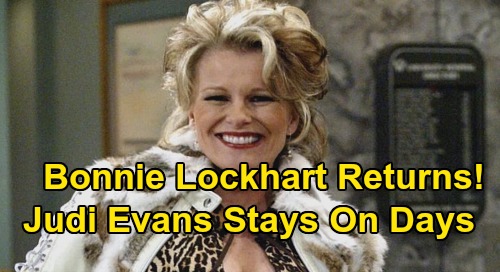 Days of Our Lives (DOOL) spoilers tease that Judi Evans will remain part of the cast, but not as Adrienne Kiriakis. Instead, she’ll soon be reprising her role as the always hilarious Bonnie Lockhart. Plenty of DOOL fans were disappointed when they heard Adrienne would be killed off. She’s been a staple at the NBC soap for many years, and her pairing with Justin Kiriakis (Wally Kurth) has always been a sweet one to root for. They’ve faced their fair share of problems, but they’ve always managed to overcome them…until now.

Sadly, Adrienne’s death is the one obstacle too tough to conquer – at least for the time being. This is Salem after all! Is anyone ever really dead-dead? Any death can be undone if the story calls for it, but there’s honestly just no need for Adrienne right now. From a drama standpoint, her demise was a smart move. It delivered emotional impact without leaving a gaping hole like a major player’s death would.

Days writers can always keep Dr. Wilhelm Rolf’s (William Utay) life-saving tactics in their back pocket. It’s possible they’ll do some rewrites and bring Adrienne back one day, but it’s Bonnie who’ll be taking the lead in the coming weeks. We’ve already seen the first hint about her return on screen. Hattie Adams (Deidre Hall) was engrossed in Bonnie’s new memoir, Love Made Me Looney.

Of course, Hattie also admitted she’d be getting out of the slammer before long. It’d be fun to see Bonnie and Hattie scheming again – and there’s a good chance we will. Since we know Bonnie will be around, it’s reasonable to assume she’ll get caught up in some Hattie mayhem again. These two are bad influences on each other, but that’s what makes their friendship so entertaining.

However, Hattie will undoubtedly think she’s owed an apology. She wasn’t happy about the way she was portrayed in Bonnie’s book. Hattie ranted about Bonnie saying she’s boorish and that she doesn’t give good advice. The truth hurts, Hattie! Bonnie was just telling it like it is, but these two should be able to patch things up.

Naturally, it should be weird for characters like Justin and Sonny Kiriakis (Freddie Smith) to see Bonnie now. Bonnie looks just like Adrienne, so her face will serve as a reminder of what they’ve lost. Perhaps that fact could tug at Bonnie’s heartstrings a bit. Regardless, Days of Our Lives spoilers say Bonnie will surely stir up some Salem trouble down the road.

Are you glad there’s still a place for Judi Evans on Days of Our Lives? Are you excited about Bonnie’s big comeback? We’ll give you updates as other Days news comes in. Stay tuned to DOOL and don’t forget to check CDL often for the latest Days of Our Lives spoilers, updates and news.