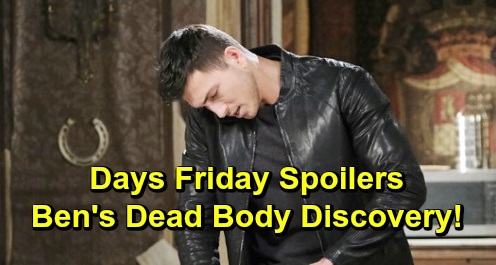 Days of Our Lives (DOOL) spoilers for Friday, November 8, tease that “Hope Brady” aka Princess Gina (Kristian Alfonso) will move in for the kill. She’s adamant that she’s not a violent person by nature, but it’s clear that she’s willing to do whatever she has to do! Princess Gina hoped to silence Jennifer Horton (Melissa Reeves) by shoving her off that balcony, but now it’s time for another murder attempt.

Just before Princess Gina can smother Jennifer, Ciara Brady (Victoria Konefal) will likely enter the room. Princess Gina will probably just pretend she was adding a pillow to make Jenn more comfortable. Whatever the case, Jennifer will remain alive and comatose for the time being.

Over with Jack Deveraux (Matthew Ashford), he’ll be a mess as he fears for his love. Since Jack will need a pep talk, Days spoilers say John Black (Drake Hogestyn) and Marlena Evans (Deidre Hall) will be happy to give him one. They’ve done this whole coma thing plenty of times, so they’re the perfect people to offer advice.

Jack will be given an hourglass that helped John in a similar situation. DOOL fans will recall how Marlena was shot at her wedding and fell into a coma soon after. John had to worry and wait, so he’ll tell Jack how he coped. He would just keep turning that hourglass and holding out hope that Marlena would come back to him.

Across town, Nicole Walker (Arianne Zucker) will confront Sarah Horton (Linsey Godfrey) about her pregnancy. Sarah’s all set to leave Salem, but Nicole will think they need to talk about the baby. Sarah, on the other hand, will think there’s nothing to discuss. She’ll push Nicole to just forget what she knows and never breathe a word about this child to Eric Brady (Greg Vaughan).

Meanwhile, Kristen DiMera (Stacy Haiduk) will deliver a shocker in the chapel. She just found Eric and announced that she has something to tell him. Will Kristen drop Sarah’s baby bomb? She’ll definitely blow up Eric’s world with some major info, so don’t miss the stunning scenes ahead.

Other Days of Our Lives spoilers say Ben Weston (Robert Scott Wilson) will discover something horrifying. He’ll locate a dead body – and it looks like it’ll be Jordan Ridgeway’s (Chrishell Hartley). Next, John and Marlena will celebrate their one-year anniversary. It’ll coincide with DOOL’s 54th anniversary, which brings us back to Jack’s hourglass and the long-awaited time jump.