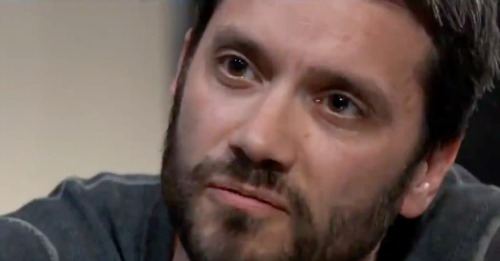 General Hospital (GH) spoilers tease that Dante Falconeri (Dominic Zamprogna) will really spiral out of control. The darkness has overtaken him, so he’s having a hard time fighting it. Dante has seen and done things that have truly affected him. His violent side will remain a problem until he decides to do something about it, but that decision is indeed coming.

Dante has some traumatic issues to work through before he can begin to heal. During the week of April 1-5, General Hospital spoilers say Laura Webber (Genie Francis) will push Lulu Falconeri (Emme Rylan) to leave Port Charles. She’ll likely learn Dante is headed off to get help somewhere and advise Lulu to go with him.

It’s possible Lulu will try to make that work for a week or two. However, it’s also possible “Lante” will agree to stay apart for now. Dante might feel like this is his burden, not his family’s. If Dante wants to deal with his trauma on his own, Lulu may choose not to stand in his way. She wouldn’t want to leave Charlotte Cassadine (Scarlett Fernandez) for too long anyway.

Whatever the case, Lulu won’t be written out permanently with Dante. Emme Rylan is on contract, so she’ll have to remain in PC or come back after being turned away by her fragile husband. Of course, we have to ask if this exit is better than Dante’s previous one. Do you like the way the show’s handling Dante’s latest departure?

There’s no ideal situation since General Hospital seemingly doesn’t want to recast and Zamprogna doesn’t want to stay. Killing Dante off would be a bad idea since Sonny Corinthos (Maurice Benard) already lost one son. Plus, Oscar Nero’s (Garren Stitt) death is coming up. GH fans don’t need any more doom and gloom!

With that in mind, we should at least be grateful that Dante’s leaving alive. This is also a more sympathetic exit since Dante is no longer a husband and father who abandoned his family. Now Dante wants to be with the people he loves, but he’ll leave to protect them. He’s a danger to himself and others, so he’s a hero for putting them first.

Still, this doesn’t fix the predicament of Lulu being stuck in romantic limbo. Even if Dante pushes her away, she’ll inevitably pine for him. It would be cruel for Lulu to move on while Dante was trying to work through a nightmare. Lulu may have no choice if Dante ultimately sends her divorce papers, but that seems a long way off.

Bottom line, Dante’s new exit story comes with pros and cons. Does it work for you overall? Do you think this is a fitting end to Dante’s latest chapter – or is it at least the best GH could do? We’ll give you updates as other news comes in. Stay tuned to the ABC soap and don’t forget to check CDL often for the latest General Hospital spoilers, updates and news.