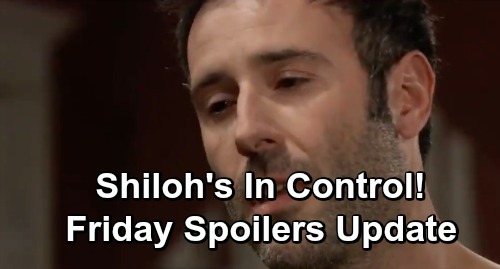 General Hospital (GH) spoilers update for Friday, May 10, tease that Kristina Corinthos-Davis (Lexi Ainsworth) will play with fire. She told Alexis Davis (Nancy Lee Grahn) she was heading over to apologize to Julian Jerome (William deVry) and ask for her job back. In reality, Kristina wanted to sneak off and seek a favor from Shiloh Archer (Coby Ryan McLaughlin).

Kristina apparently doesn’t understand the gravity of the situation. She’ll tell Shiloh she’d appreciate it if he’d return her pledge. Come on, Kristina. Like that’s going to work! Shiloh gets these pledges for a reason and that reason is blackmail. He wants to be able to control his followers so they can never escape his firm grip.

Shiloh will undoubtedly spin this with his usual blend of creepiness and superficial congeniality. He’ll likely deny Kristina’s request and suggest that her place is still at DoD. Shiloh won’t want her family getting inside her head, but he’s too late. We’ll just have to hope that Kristina can stay strong – even when Shiloh could expose that trust offering.

Sonny Corinthos (Maurice Benard) will certainly be worried about Kristina drifting back to the dark side. However, Dr. Neil Byrne (Joe Flanigan) will have faith in Kristina. He’ll urge Sonny to trust his daughter and let her go. Sonny won’t like the idea of Kristina being free to roam around town on her own yet, but it’s an important step in her exit therapy. Kristina has to make her own choices.

Other General Hospital spoilers say Ava Jerome (Maura West) will focus on her plot with Dr. Kevin Collins (Jon Lindstrom). She’ll desperately want to finish Kiki Jerome’s (Hayley Erin) killer off for good, but Kevin will offer a warning. He’ll get that Ava’s furious and always will be, but putting her own life on the line isn’t the answer.

Of course, Ava’s already doing that through this scheme. She’d only be making matters worse by specifically trying to confront Ryan. Nevertheless, Kevin will insist they have to be careful here. He won’t want to create any unnecessary risks as they await contact from Ryan.

Elsewhere, Laura Webber (Genie Francis) and Curtis Ashford (Donnell Turner) will take a little breather. They’ll be busy on their mission to track Ryan down, but they’ll stop at a restaurant briefly. It’ll give them an opportunity to gather their thoughts and figure out a solid strategy to locate Ryan. Laura will be most concerned with finding Ryan before he can attack Ava, Kevin or anyone else.

At GH, Jordan Ashford (Briana Nicole Henry) will get a visit from T.J. Ashford (Tajh Bellow). He may be upset that Curtis isn’t by Jordan’s side, but she’ll quickly explain that Curtis is busy looking for Ryan. Jordan will make it clear that it’s what she wants. There’s nothing Curtis can do by Jordan’s bedside, but he can get out there and make a difference when it comes to finding this murderer.

In Paris, Maxie Jones (Kirsten Storms) and Peter August’s (Wes Ramsey) evening will be going splendidly. Peter will take Maxie to all his favorite spots as promised, so she’ll reveal she’s having a blast. General Hospital spoilers say there’ll be some definite heart eyes going on. Will Peter and Maxie make love soon? They seem to be inching in that direction, so it may be coming up before you know it.

It sounds like some excellent scenes are on the way. We’ll give you updates as other GH news emerges. Stay tuned to the ABC soap and don’t forget to check CDL often for the latest General Hospital spoilers, updates and news.