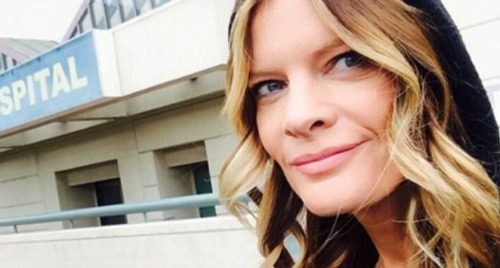 General Hospital (GH) spoilers reveal that Michelle Stafford’s run as Nina Reeves will soon come to an end. She’s heading back to The Young and the Restless to reprise the role of Phyllis Summers, so the un-recasting announcement came as a huge shock to many soap fans. Gina Tognoni, who currently plays Phyllis, addressed her departure on social media, but Stafford remained silent for the most part.

Stafford did comment on General Hospital’s 56th anniversary along with her other costars by saying it’d been both an “honor and a privilege.” However, GH and Y&R fans were eager to hear something about her role swap. Stafford still hasn’t tackled the issue directly, but she offered some words of gratitude along with a reason why she wasn’t on social media as much.

On Instagram, Stafford sent love back to all her followers. She was truly touched by some of the responses she’s read, so many Y&R viewers were undoubtedly happy to welcome her back as Phyllis. Of course, Stafford received well wishes from sad General Hospital viewers, too. Nina fans will miss Stafford in the role, but she made the deal she felt was right for her.

Stafford specifically talked about her father, who turned 80 last year and recently had heart surgery. His operation may have been one of the reasons she wasn’t around much during all the soapy madness. Stafford was busy dealing with her real-life family crisis, but she had some good news to report. It seems her dad came through the surgery and is now recovering nicely.

Part of Stafford’s caption said, “I love all of you guys! Truly…You are so lovely to me. Thank you for all of your kind words and love. I wanted to thank all of you who reached out to me and DM’d me in the last few days about my father’s heart surgery. You cannot know what that has meant to me. All is good…Thank you.”

There’s no word yet on Stafford’s final airdate as Nina or when her return airdate at Y&R will be, but more announcements should follow. In the meantime, General Hospital spoilers say Nina’s storyline will continue and will likely include a recast down the road. We’ll give you updates as other GH details emerge. Stick with the ABC soap and don’t forget to check CDL often for the latest General Hospital spoilers, updates and news.