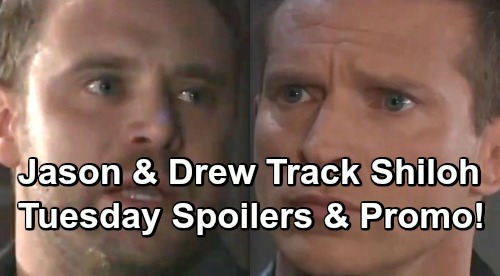 General Hospital (GH) spoilers for Tuesday, February 19, tease that Maxie West (Kirsten Storms) will feel confident in her plan. She’ll tell Peter August (Wes Ramsey) that she’s going to find out the truth about Sasha Gilmore (Sofia Mattsson). Maxie called to schedule a mani-pedi with Sasha, so it seems she’ll use this as her shot to score some DNA. She should be able to order her own test soon enough.

Over with Curtis Ashford (Donnell Turner), he’ll also have some Sasha suspicions. Curtis believes Sasha is Nina’s daughter thanks to two sets of DNA results, but he still won’t know if she can be trusted. He cares about Nina Reeves (Michelle Stafford), so he’ll want to look out for her in Tuesday’s GH episode.

Curtis will have a chat with Sasha and suggest he hopes she’s as genuine as she seems. He’ll hate the idea of Sasha exploiting Nina’s love, but the massive lie she’s told is the real issue here. Valentine Cassadine’s (James Patrick Stuart) manipulation has caused a huge mess and it’s only going to get messier.

Meanwhile, Lulu Falconeri (Emme Rylan) will have an incredible story to tell. Nina recently doubted Lulu’s hypnosis memories. Curtis didn’t seem sold either, so Lulu may dig her heels in and start spreading the word. Perhaps she’ll think her version of events would make a great article for The Invader.

At GH, Dr. Kim Nero (Tamara Braun) will fill in for another OB-GYN. It turns out that’ll be significant due to her patient. As Sonny Corinthos (Maurice Benard) stands by his wife’s side, Kim will admit she’s been asked to cover Carly Corinthos’ (Laura Wright) appointment.

General Hospital spoilers say Carly and Sonny will find out for sure if they’re going to be parents again. There’s always a chance the home tests produced a false positive, especially if Carly has some medical issue no one knows about yet.

However, if Carly is indeed pregnant, she’ll want to know what the risks are. Sonny is deeply concerned about how this baby could affect Carly’s health, so he’ll be on edge, too.

While Carly and Sonny seek answers, Shiloh Archer (Coby Ryan McLaughlin) will tell Sam McCall (Kelly Monaco) there’s something she needs to see to understand. This will undoubtedly be some shady maneuver, so Sam will have to be careful and shift her strategy if need be. She’ll do whatever it takes to bring Shiloh down, but Jason Morgan (Steve Burton) will continue to fret about Sam’s safety.

Jason will have a conversation with Drew Cain (Billy Miller) as they consider their mutual enemy. Drew’s mixed up in this as well since Shiloh apparently spilled major secrets to him once upon a time.

He’ll point out that he wants to know what kind of game Shiloh is playing. Like Jason, Drew will also want to make sure Sam stays safe, so it’s good that these brothers will be in agreement on that.