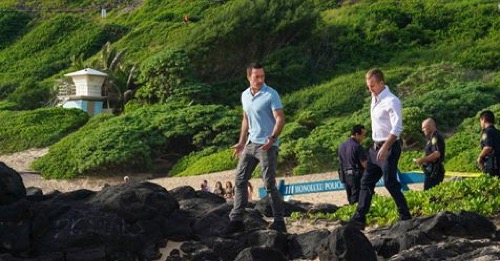 Tonight on CBS Hawaii Five-0 air with an all-new Friday, January 18, 2019, episode and we have your Hawaii Five-0 recap below.  On tonight’s Hawaii Five-0 season 9 episode 13 “Ke Iho Mai Nei Ko Luna (Those Above Are Descending)” as per the CBS synopsis, “Adam, Junior and Tani travel to the bottom of the Pacific Ocean when a murder takes place in a remote underwater lab, and the killer may still be on board.”

Danny was pestering his daughter. She had just gotten out of the hospital and was feeling much better, but Danny wanted to feed her soup all the time and so McGarrett took pity on Grace. She deserved a day at home without her father watching her every moment and so McGarrett dragged Dany out on a case. There was a dead body that washed up on the beach. The body was that of Jason Kamaka who was a professor of oceanography and he had recently taken leave from the university to join the Neptune Crew. The Neptune Crew were part of an underwater lab experiment and the people involved were supposed to be studying the effects of killer whales on the ecosystem. And it was this huge thing because an eccentric billionaire was funding the project.

But Kamaka’s homicide took precedence. He had been murdered and it had happened below sea level which means he was killed at this underwater lab. The team needed to go down there to investigate what happened to Kamaka and before they did they wanted to do their proper research. They looked into the rest of the crew and it had been the top people in the oceanography field. They also spoke with Kamaka’s widow. Lisa Kamaka said that they needed the extra money and that was why her husband chose to go on the mission. Kamaka couldn’t really talk about what he was doing because of the confidentiality agreements though he had let on to his wife that the job was nothing like he thought it was going to be.

Lisa was kicking herself for letting her husband go on the mission, but they have a sick son and couldn’t have afforded the treatments without the extra cash that the private studies were willing to pay. So McGarrett made her a promise. He promised to find out who was behind this and later that day he had his team go deep-sea diving. Junior went with both Adam and Tani. All three swam to the underwater lab and what they found had been surprising. They came across blood splatter in the hallways and had found several injured doctors that complained of a crew member turning on them. There had been some that claim Kamaka had attacked them and others that said that it had been a Dr. Nash.

They had left Adam with the group of survivors they found and Junior and Tani went looking for Nash. They were walking around the lab when they saw, even more, blood splatter and found a doctor that tried to attack them. It turns out it was Nash. They managed to knock him out and saw what he had been trying to protect.  He was trying to hide a secret room that wasn’t on the plans. The room held several specimens and one of them was a rare commodity that went into making cell phones. It was worth a fortune and it went towards explaining why the billionaire had actually created the lab in the first place. He had the scientists searching for this ingredient that would make him richer and not everyone even knew about it.

The other scientists hadn’t known who they could trust because they hadn’t known about this secret project, but then Nash woke up and he said that Nostromo erased his data. He believed that Nostromo was trying to cover his tracks over the illegal mining and that the billionaire probably ordered the deaths of Kamaka as well as himself. Nash wasn’t sure if he could trust anyone else on the crew because he didn’t know who Nostromo’s inside man was. But the team called in what they had learned. Five-0 was asking the billionaire about the allegations made against him and he denied everything. He said that he wasn’t trying to sabotage the mission and he denied knowing about the mining.

The only thing Nostromo was willing to admit was that he had an inside man. He said he wanted to make sure the others were doing their part and so while the team on the ground was hearing the name – the team at the lab figured out which doctor was trying to kill all of them. It seems they noticed that it was getting harder to breathe the longer they were there and so they checked the oxygen levels. The levels showed that the oxygen was dangerously low and that meant someone had sabotaged it. But the only one that didn’t need to worry about the oxygen was the woman they gave their oxygen tank too. She was apparently faking being sick because she got up when they weren’t looking and had trapped them in the room before they could get her. She later made her escape and she made sure that the others couldn’t escape at all.

The saboteur left her crew and Five-0 with an hour’s worth of oxygen. They would have died if their team hadn’t gotten worried and came to check them. McGarrett went down there and he gave them his oxygen tank when he saw them all passed out. He took one final breath before going for a rescue team.

It took some time, but they found their murderers and she was going to pay for what she did.

Nostromo managed to escape charges himself and he still paid for Kamaka’s son gene therapy.

So all in all not so bad!