The Young and the Restless Spoilers: Adam Newman’s Mystery Woman Riza – What To Expect

BY Sean O'Brien on May 4, 2019 | Comments: Leave Comments
Related : Soap Opera, Spoiler, Television, The Young and the Restless 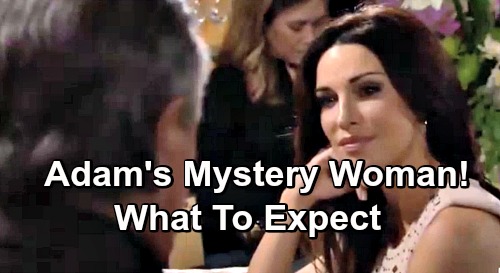 The Young and the Restless spoilers tease that Riza Thomas (Tina Casciani) is protecting a person known as Spider, which is what Adam Newman’s (Mark Grossman) assumed name as he works an underground gambling ring. Victor Newman (Eric Braeden) is taking unusual measures in reaching out to this new character and to Sharon Newman (Sharon Case) in order to help his undead son.

The long-teased comeback of one of Genoa City’s most memorable characters was confirmed earlier this year. The recast of Grossman is noteworthy, in that he’s playing the fourth adult version of Adam. He follows Chris Engen (2008-2009), Michael Muhney (2009-2014), and Justin Hartley (2014-2016).

This go-round, Adam lost his memory, which likely occurred due to the cabin blast that Chloe Mitchell (Elizabeth Hendrickson) purposefully caused. As Y&R fans recall, she shot a sedative into her mortal enemy with a dart gun and then tied him to a bed post in that setting, which was serving as a hideaway house.

Victor arranged for Adam’s (as then played by Justin Hartley) break-away from his prison transport, where he was heading after receiving a long sentence. He’d beaten the Constance Bingham (Sally Kellerman) murder rap that Chloe framed him for, but subsequently beat a prison guard unconscious, which resulted in a second conviction and sentencing.

Viewers were led to believe that there was no way Adam could have escaped the woodsy explosion. Paul Williams’ (Doug Davidson) CSI staff tagged DNA samples as being Adam’s, which led to him being pronounced as assumed dead.

As far as Riza, she’s played by an actor who sports a rather extensive entertainment resume, considering that Casciani is set to turn 31 in June. Her first film appearance, in the movie Intern, was in 2000. That was followed by an appearance in 2001’s Zoolander. Her first of many television credits came in 2009, when she appeared in How I Met Your Mother.

During this decade Casciani has appeared in many TV shows, including Reno 911!, CSI: Miami, Burn Notice, and CSI: Crime Scene Investigation. Her most recent credit is in Miss 2059, where she appeared in 11 episodes in 2017 and 2018.

Whether Riza is a bridge character, helping to explain Adam’s plight after which she’ll be written out, will soon be seen. She could be Spider’s (assuming this is the name Riza knows him by) significant other, or simply a protector. Hopefully Casciani remains, as solid actors are engaging.

The write-in of Sharon is intriguing, as she preceded Chelsea Newman (Melissa Claire Egan) as the great love of Adam’s life. Y&R fans know that Egan’s return to the cast has just been announced. So Chadam will, at some point, be back on.

Until then, Riza, Sharon, or possibly both will help the man of many faces and lives begin to reclaim his memory. Then, as is often soap lore, Adam will seek to restore his daytime life. What do you expect from Adam’s mystery woman, Riza? CDL is a leading source for everything linked to The Young and the Restless. Check back regularly for Y&R spoilers and news!