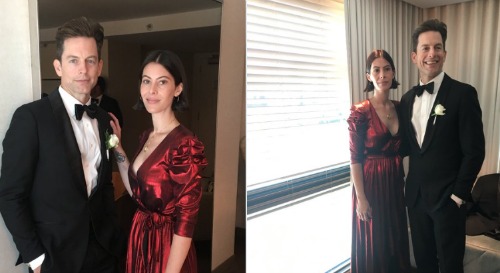 The Young and the Restless spoilers have some disturbing news to pass on about an internet troll who harassed a popular Y&R alum. Michael Muhney, who portrayed Adam Newman from 2009-2014, is active on Twitter, where he frequently shares updates about what he and his family are up to.

Fans thoroughly enjoy interacting with Michael, and he frequently responds to their well-wishes and comments. As you might imagine, Michael gets a lot of comments from fans expressing their praise for his past portrayal of Adam Newman on The Young and the Restless, but they also frequently comment on what he’s up to with his wife Jaime Muhney and his kids.

Well, recently, one of his Twitter followers decided to make some derogatory comments about his wife after Michael posted some photos of himself and Jaime. We won’t go into the troll’s comments, and they’ve since been deleted from Twitter, but suffice it to say that they were vicious enough to prompt a strong response from Michael.

Michael tweeted: “Humans like you have ruined the Internet. Typing your word-vomit about my wife is going too far. You must have real pain & sadness in your life to express yourself like this online. My wife is stunning. She takes my breath away. Find somebody who says that about you.”

Michael’s fans have responded in droves to his comments, and to the original comments made by the troll, and their responses are wholly supportive of Michael and his family. One fan said: “Michael, your wife is so beautiful, you look stunning together, I love seeing the two of you together, you’re lucky to have each other and your beautiful children. Forget this ignorant troll.”

And another fan said; “Good for you! There are people on Twitter who have no sense of decency. It really boggles the mind how these people can be so mean and unthinking. Jaime is gorgeous, sweet, and fun. I love you both!”

Finally, one fan praised Michael for defending his wife by saying: “Your wife is beautiful and so blessed to have a loving husband that sticks up for her. So sweet. Ppl like to tear down other ppl when they have something they don’t. Don’t let them steal your joy.”

It’s great to see so many fans supporting Michael and Jaime, and hopefully Michael will continue to share updates and photos with his fans going forward. Stay tuned to the CBS soap and don’t forget to check CDL often for the latest Young and the Restless spoilers, updates, and news.

Humans like you have ruined the Internet. Typing your word-vomit about my wife is going too far.

You must have real pain & sadness in your life to express yourself like this online.

My wife is stunning. She takes my breath away. Find somebody who says that about you. https://t.co/OfVuD6trzN

Sporting #TheBlackTux as a groomsman at my bff’s wedding at The SLS in Beverly Hills with my wife, Jaime, on my arm…LIFE IS GOOD ❤️❤️ pic.twitter.com/xgTst6CjGP