The Young and the Restless Spoilers: Wednesday, December 4 Recap – Theo Dumps Summer – Devon Dreams of Hilary, Who Turns Into Amanda 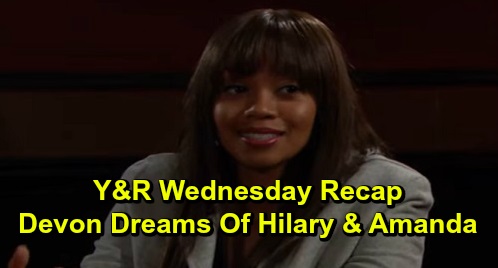 The Young and the Restless (Y&R) spoilers recap for Wednesday, December 4, teases that some surprising secrets will be kept. Before we get to those, we should mention that impeachment hearings coverage is set to continue. It’s possible Wednesday’s episode will be bumped to Thursday, so just keep that in mind.

Now let’s talk about all the action happening in Genoa City. First, Billy Abbott (Jason Thompson) and Victoria Newman (Amelia Heinle) will catch each other up on how they spent their stormy night. Victoria will talk about getting locked in her office, and Billy will admit he was out for a drink when the worst of it hit.

After Victoria steps away, Billy will do some self-reflecting. He’ll wonder why he couldn’t bring himself to divulge the whole story to Victoria, including his encounter with Amanda Sinclair (Mishael Morgan). Billy won’t understand his guilt or why he feels the need to hide things.

Later, Billy will make a to-do list that involves picking up the kids and calling Jack Abbott (Peter Bergman) about dinner plans. He’ll add figuring out who he is and what he wants to the list, but he’ll ultimately delete it and head out the door.

At Society, Amanda will greet Nate Hastings (Sean Dominic) and suggest she’s sorry he’s facing backlash for hanging out with her. They’ll have a conversation about Devon Hamilton (Bryton James) and his struggles over the will scam. Elena Dawson (Brytni Sarpy) will also come up during this chat, so Amanda will admit she thinks there’s more to the hostility than just her part in the case.

Nate and Amanda will end their discussion on a light note before Nate exits. Soon after, Billy will find Amanda at the bar and buy her a coffee. They’ll spend more time connecting until Billy gets summoned to pick up Katie Abbott (Sienna Mercuri). Amanda will smile over their latest chance encounter after Billy leaves.

At Devon’s penthouse, Elena will grow concerned about him working too hard. Devon will have been up half the night tackling a crisis for Tucker McCall’s (Stephen Nichols) employees. Even so, he won’t be willing to bail on his day at work. They’ll also discuss Cane Ashby (Daniel Goddard) offering to give up the twins’ trust fund money and Devon turning him down.

Elena will admit she feels like their relationship has suffered since Devon’s been so busy. After they promise to address the problem later, Elena will leave looking troubled. Next, Devon will take a call from Cane. They’ll determine that Colin Atkinson (Tristan Rogers) is most likely paying people to pass along bogus leads.

Soon after, Y&R spoilers say Devon will doze off and dream Hilary Hamilton (Mishael Morgan) is still alive. He’ll tell Hilary about the accident and how she didn’t survive, so she’ll suggest that sounds like a nightmare. Devon will lean in for a kiss, but he’ll see Amanda once he pulls back and jolt himself awake.

At Crimson Lights, Summer Newman (Hunter King) will get the wrong idea about Theo Vanderway’s (Tyler Johnson) suggestion. He’ll talk about wanting to move out of his hotel suite and into a more permanent place. Summer will think Theo is pushing her to live with him, but he’ll insist he was just hoping for more closet space.

However, once the topic is broached, Theo will be curious if the thought had ever crossed Summer’s mind. He’ll seem pensive when Summer’s less than enthusiastic about more togetherness. Later, Theo will shock Summer by suggesting it’d be good for them both to take a step back from this. She’ll realize Theo’s breaking up with her, and he’ll explain that they always stay on the surface. They never talk about anything deep. Summer won’t appreciate when Theo brings up Kyle, but she’ll agree it’d be a smart move for Theo career-wise.

Back at the coffeehouse, The Young and the Restless spoilers say Nate and Elena will once again debate Amanda. He won’t get why Elena’s so unwilling to give Amanda a chance, but Elena will feel like Amanda’s a constant reminder of what Devon lost. Moments later, Elena will get a call and head over to Society for lunch with Devon. Once she arrives, Devon will make it clear that Elena’s his priority.

At the Grand Phoenix, Abby Newman (Melissa Ordway) will complain to Victoria about the hotel thefts and her difficult partnership with Phyllis Summers (Michelle Stafford). Victoria will think Abby just needs to break this unlucky streak she’s got going. She’ll give Abby a pep talk about being meant to work in hospitality before Abby pushes Victoria to carve out more time for Billy.

After rejoining Billy at home, Victoria will wonder how his day went. Billy will simply tell Victoria it was good before she has to dash off again. The Young and the Restless spoilers say all the secrets in GC could be dangerous! We’ll give you updates as other Y&R news comes in. Stay tuned to the CBS soap and don’t forget to check CDL often for the latest Young and the Restless spoilers, updates and news