The Young and the Restless Spoilers: Week of July 8 Preview Update – Adam Sells Out Chelsea – Frames Ex-Wife For Murdering Calvin

BY hellodrdavis on July 7, 2019 | Comments: 2 comments
Related : Soap Opera, Spoiler, Television, The Young and the Restless 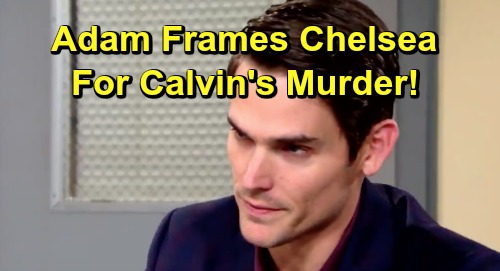 The Young and the Restless spoilers tease that Adam Newman (Mark Grossman) is pulling out all the stops to get his son Connor Newman (Gunner and Ryder Gadbois) back. Ever since Chelsea Newman (Melissa Claire Egan) came back to town, Adam has had a single goal in mind – to reclaim his family and get her and Connor back.

But according to the new Y&R promo preview for the week of July 8, Adam is going to change tactics. He thought that since Calvin Boudreau (John Burke) had suddenly passed away, he and Chelsea would automatically get back together.  As Y&R viewers will remember, Adam cornered Chelsea not long after Calvin’s death to tell her that the “roadblocks” were out of their way and that they could again be a family with Connor.

Well, that didn’t sit well with Chelsea. She doesn’t want Adam anywhere near Connor, and she’d prefer for Connor to not even know that he’s a Newman. And Adam won’t stand for that. This week, he’ll decide that he’s willing to do anything to reclaim Connor, no matter who he has to destroy, and it certainly looks like he’ll be willing to destroy Chelsea to do so.

Specifically, the promo shows Chelsea reeling from the new investigation into Calvin’s death. According to Chelsea, she and Calvin went to bed, and when she woke up, he was dead. But it looks like Adam is going to give Paul Williams (Doug Davidson) some reasons to consider whether foul play was involved in the death.

Chelsea is heard in the promo lamenting that Paul is investigating Calvin’s death as a possible murder, and that he’s treating her like a suspect. And Adam is shown at the police station having an intense conversation with Paul. It certainly looks like he’s going to point Paul in the direction of Chelsea having murdered Calvin. But how?

Well, Y&R viewers will remember that Adam and Calvin had an off-screen conversation a few hours before Calvin’s death. And after that conversation, Calvin told Chelsea that he thought that Adam should have custody of Connor, which would free up them to have a baby of their own. Calvin and Chelsea ended up fighting bitterly about the issue before retiring to bed, where Calvin ultimately died.

This means that Adam is armed with some information that could paint Chelsea in a pretty bad light. Adam will likely relay his conversation with Calvin to Paul and strongly suggest that Chelsea had every motive to kill Calvin to protect her son. He’ll probably argue that Chelsea saw Calvin as an obstacle to keeping Connor away from Adam and decided to do him in.

The promo certainly suggests that this is exactly what Adam is going to do. Adam is shown telling Phyllis Summers (Michelle Stafford) that “Chelsea’s keeping my son from me. She’s about to find out what a mistake that is.” Phyllis will respond that she didn’t realize that Adam was that cold, while Adam just nods.

Of course, Chelsea will have a big ally in Nick Newman (Joshua Morrow) throughout this whole ordeal. She’ll feel like the walls are closing in on her, but she’ll likely have both Nick and possibly even Victor Newman (Eric Braeden) on her side in this fight. Of course, if she truly didn’t have anything to do with Calvin’s death, she shouldn’t have anything to worry about, right?

Well, consider this…what if Adam himself had something to do with Calvin’s death, and he plans to pin the murder on Chelsea? That would be a very “Adam” thing to do. Adam certainly had motive for wanting Calvin out of the picture. Adam could plant (or have already planted) some evidence against Chelsea making it look like she killed Calvin.

We’ll have to wait to see what Paul’s investigation into Calvin’s death turns up, but the promo makes it clear that Adam’s out to throw Chelsea under the bus so he can reclaim custody of Connor. Do you think Adam’s plan will work and he’ll get Connor away from Chelsea? Stay tuned to the CBS soap and don’t forget to check CDL often for the latest Young and the Restless spoilers, updates, and news.