The Young and the Restless Spoilers: Y&R Preemption Schedule Revealed – Impacts This Week’s Programming, November 11 to 15

BY hellodrdavis on November 10, 2019 | Comments: one comment
Related : Hot News, Soap Opera, Spoiler, Television, The Young and the Restless 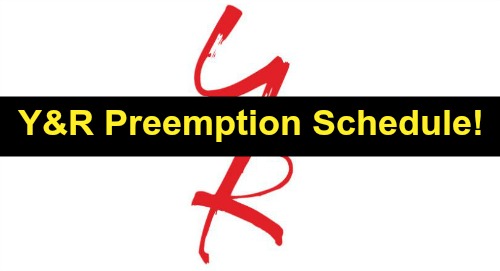 The Young and the Restless spoilers has some programming notes to pass on that will affect most of CBS’s daytime programming during the week of November 11, 2019. CBS has announced that it will be preempting its daytime shows, including Y&R, for the impeachment hearings that will take place on Wednesday, November 13, and Friday, November 15.

Coverage of the hearings is currently scheduled to begin at 10am Eastern on Wednesday, November 13, and at 11am Eastern on Friday, November 15, but it’s quite likely that there will be both pre-hearing and post-hearing coverage and commentary that will air as well, so Y&R will most likely not air in any US markets on those days.

We’ll let you know of any changes to this programming schedule, and we’ll of course continue to post our recaps of shows once they air, so you won’t have to worry about missing anything.

So, what can we expect on Y&R this week, November 11-15? Well first off, Ashley Abbott (Eileen Davidson) will return to Genoa City. It seems that she will want to meet her nephew, Theo Vanderway (Tyler Johnson), who was recently revealed to be the grandson of Dina Mergeron (Marla Adams) and Stuart Brooks (Robert Colbert). According to Y&R spoilers, she’ll stun Theo with a job offer…in Paris!

But will Theo take her up on her offer? That would mean leaving Genoa City and his career as an influencer manager behind. But given that his career has kind of hit the skids lately, he just might jump at the chance to leave it behind. It would certainly please Kyle Abbott (Michael Mealor) if Theo went away, but will he really be happy about Theo getting an opportunity at Jabot?

Y&R viewers can expect Paul Williams (Doug Davidson) and Rey Rosales (Jordi Vilasuso) to get involved in the standoff as well, but since they’ll be on the outside, there may not be much they can do. Rather, it looks like Chance and Phyllis Summers (Michelle Stafford) will be the big heroes, as Chance goes crawling through an air duct to save the day. He’ll have special knowledge of the hotel’s layout thanks to Phyllis, so they’ll make a good team.

At any rate, it looks like we’re in for some excitement this week, despite the planned preemptions due to the impeachment hearings. Again, we’ll keep you posted with recaps per usual for shows that air, so you won’t miss a thing! Stay tuned to the CBS soap and don’t forget to check CDL often for the latest Young and the Restless spoilers, updates, and news.