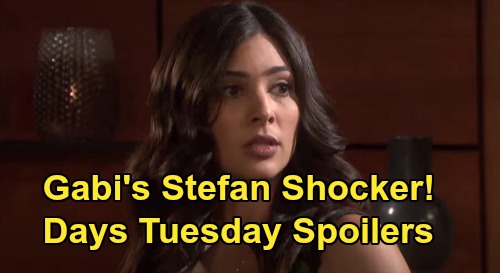 Days of Our Lives (DOOL) spoilers for Tuesday, April 21, tease that Gabi Hernandez (Camila Banus) will face off with Chad DiMera (Billy Flynn). Tony DiMera (Thaao Penghlis) will eventually get in on the action as Gabi fights for what she wants: the CEO seat at DiMera Enterprises.

Since we know Li Shin (Remington Hoffman) will share scenes with Gabi on Wednesday, April 22, there may be a setup for that on Tuesday. DOOL’s weekly promo shows Gabi mistakenly believing Stefan DiMera (Brandon Barash) is in the DiMera office. A man who looks like Stefan from the back is sitting in a chair by the window.

Perhaps Gabi will walk in and see Li, who can spin around and reveal himself for his Wednesday debut. Of course, those of you who watched the Chad and Abby in Paris series on the DOOL app will remember Li. He’ll be a huge part of all this DiMera Enterprises action in the coming episodes.

Steve was horrified when he realized he tried to kill Kayla Brady (Mary Beth Evans) – and that was one of the reasons he pushed her away.

Hope is also struggling to get past her own actions, even if she wasn’t in control of them at the time. Hope had a long list of crimes as “Princess Gina Von Amberg,” including trying to kill Jennifer Deveraux (Melissa Reeves).

Days of Our Lives spoilers say Hope and Steve will have a chance to talk about all that. They’ll discuss their guilt and commiserate as they try to cope. It’ll be good for both Steve and Hope to have someone they can relate to during this difficult time.

Speaking of difficult times, Kayla’s facing one of those as well. Justin Kiriakis (Wally Kurth) just found Kayla looking terribly upset, so she’ll explain why on Tuesday. Days of Our Lives spoilers say Kayla will rant about how Steve rejected her. She’s sick and tired of Steve thinking he can make unilateral decisions about her life.

However, Justin will be unsettled by Kayla’s latest news. He’ll worry that Kayla’s not really choosing him since Steve’s leaving her with no choice at all. Days spoilers state that Kayla will offer reassurance and decide Steve’s right. She’ll determine that Justin is what’s best for her, but Justin may still have a few concerns deep down.

Over with Kate Roberts (Lauren Koslow), she’ll seek a new job working for Abe Carver (James Reynolds). Naturally, Salem’s mayor may have some reservations about hiring a wildcard like Kate, but she can probably sell Abe on the idea. Kate has a way of getting what she wants, so Abe may tell her she’s hired soon enough.

As other Days details become available, we’ll deliver more updates. It sounds like the drama’s about to heat up! CDL’s the place to be for fantastic Days of Our Lives spoilers, updates and news, so don’t forget to check back often.