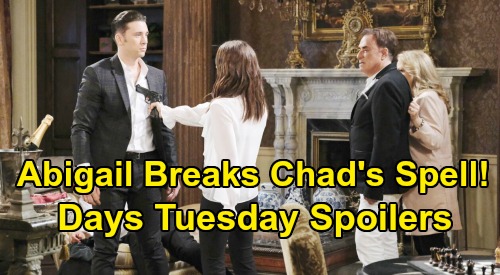 Days of Our Lives (DOOL) spoilers for Tuesday, March 31, tease that Abigail DiMera (Kate Mansi) will do her best to break Stefano DiMera aka Steve Johnson’s (Stephen Nichols) spell. Chad DiMera (Billy Flynn) has been programmed by his devious father, so he’s done some pretty horrible things lately.

However, Abigail will hope she can get through to Chad and get him back to his old self. Abby will even hold Chad’s gun on him at one point, so she’ll truly be desperate! It’s up to Abigail to stop this dark DiMera madness – and thankfully, she’ll achieve her goal.

While Abigail fights for her man, Anna DiMera (Leann Hunley) will cause total mayhem. DOOL viewers know Anna just attacked Stefano with her stiletto, so we’ll see the damage she caused on Tuesday.

Days of Our Lives spoilers say Stefano will rage over Anna poking his eye out. The Maison Blanche living room will be a bloody mess thanks to Anna’s latest move.

Naturally, there’s a good reason why Anna gave Stefano this familiar injury. It’s because the real Steve will be returning soon, so Days had to lay the groundwork for that. “Patch” can’t be “Patch” without his patch! For now, Stefano will unleash his wrath, so Tony DiMera (Thaao Penghlis) should step up to defend and protect Anna.

Other Days of Our Lives spoilers say Justin Kiriakis (Wally Kurth) and Kayla Brady (Mary Beth Evans) will mull over the fate of their relationship. Things are a bit up in the air since they don’t know what the future holds. Everyone’s hopeful Steve can get back to normal, but Kayla’s been adamant about being happy with Justin.

Of course, being happy doesn’t mean Kayla wouldn’t be happier with Steve – that is if his upcoming surgery works! There are still a lot of maybes and what ifs here, so it may be tough for Justin and Kayla to make a firm decision just yet. DOOL spoilers say Justin will still be worried about losing Kayla next week, so they should stick together for the time being.

As for Ben Weston (Robert Scott Wilson) and Ciara Brady (Victoria Konefal), they’ll be on cloud nine in Tuesday’s episode. Ben scored his freedom, so now they have a chance to think about their future. Days of Our Lives spoilers say Ciara and Ben will talk about their career plans, but they’ll get personal, too. Ben will even suggest making some relationship status updates.

It looks like Ben will deliver an informal marriage proposal, which Ciara will gladly agree to. This is great news for “Cin” and all their fans! Be sure to check back frequently for other hot Days of Our Lives spoilers, updates and news.