Days of Our Lives Spoilers: Week of March 16 Preview – Orpheus Is Back – Kristen & Nicole’s Catfight – Marlena Swoons For Stefano

BY hellodrdavis on March 13, 2020 | Comments: one comment
Related : Days of Our Lives, Soap Opera, Spoiler, Television 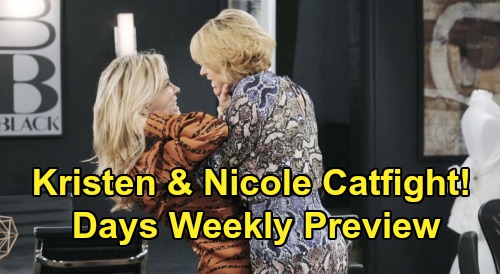 Days of Our Lives (DOOL) spoilers preview teases that we’re in for some exciting upcoming drama, and the new DOOL promo is all about four big storylines that will be center stage during the week of March 16th. It’s all about lovers, fighters, heroes, and villains, and we think that’s going to make for a great week, so let’s get right into it!

Sarah recently told Xander that she loved him and that she wanted to be with him, and Xander was thrilled. The two are now a couple, and Xander’s going to take things to the next level during the week of March 16th when he proposes.

The promo shows Xander and Sarah enjoying a nice dinner at The Bistro, with Xander holding a ring box and asking Sarah to marry him. Sarah looks pretty surprised, so we’ll see what her answer is, but given that the baby swap drama will probably be exploding in the near future, it’s likely that she’ll say yes and the two will be blissfully happy…at least for a while.

And speaking of that baby swap drama, the next part of the promo – which is titled “fighters” – addresses Nicole Walker’s (Arianne Zucker) quest to prove her newfound suspicion that Sarah and Eric Brady’s (Greg Vaughan) daughter Mackenzie “Mickey” Horton is actually the biological daughter of Kristen DiMera (Stacy Haiduk) and Brady Black (Eric Martsolf). As DOOL viewers know, Nicole saw a telling birthmark on Mickey, and now she suspects that Mickey is actually Kristen and Brady’s daughter.

Well, it seems that Nicole will want some tangible proof before she says anything to anybody, and so she’ll pick a fight with Kristen in order to score a DNA sample from her. In the new DOOL promo, the ladies are shown in a serious physical brawl, and Nicole seems to have her hands clutching the back of Kristen’s neck. It sure looks like she’s trying to get a hair sample to us!

At any rate, someone is shown walking into the room as the women fight, and it’s probably Brady, who will break up the cat fight. But little will he know that Nicole will likely have gotten the evidence she needs to prove that his daughter is actually alive.

So far, the procedure hasn’t worked 100%, but Rolf has said that it will take some time for Marlena to become willing to submit to Stefano. Stefano’s currently holding Marlena captive and waiting for her to become totally devoted to him. Well, of course, John is beside himself, and he knows that the race is on to find Marlena before it’s too late.

John’s shown in the DOOL promo saying that Marlena’s in danger and that he wants Stefano dead. Of course, the situation is tricky, because Stefano is inhabiting Steve’s body, so it’s not like John can just go kill Stefano and be done with it. There’s some urgency here to save Steve, who’s also a victim of Stefano’s. It’s a real mess.

Finally, let’s move into the fourth and final piece of the promo, which is the “villains” segment. As DOOL viewers know, Orpheus (George DelHoyo) just popped back up on the Salem scene as Evan Frears aka Christian Maddox’s (Brock Kelly) father and the grandfather of David Ridgeway (Jaxton and Dexter Ellis). Orpheus has been helping Evan by secretly keeping an eye on David while Evan has been dealing with the police.

The promo shows Rafe Hernandez (Galen Gering) on the phone with someone, saying with great confidence that “Orpheus is dead.” And Orpheus is shown in a hoodie lurking around University Hospital for some reason, so he must have more in store for the people of Salem that just babysitting a kidnapped David. The preview promo ends with him telling someone ominously that “Orpheus is back.”

We’ll see how long it takes for Rafe to find the connection between Evan and Orpheus. He’s probably going to be horrified to realize that the child he considers to be his son is actually the grandson of one of the most horrible villains that Salem has known!

It’s going to be an exciting week on Days of Our Lives during the week of March 16th, so make sure you stay tuned to the NBC soap! We’ll be sure to keep you informed with DOOL updates and spoilers on CDL as we get more information.