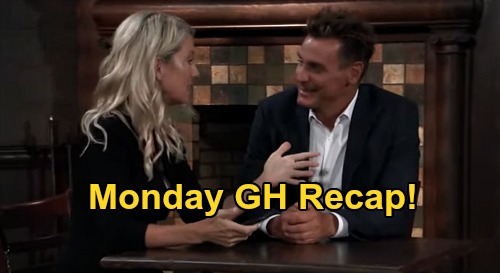 General Hospital (GH) spoilers recap for Monday, September 14, reveal that Nina Reeves (Cynthia Watros) and Jasper “Jax” Jacks (Ingo Rademacher) headed to a bar in Manhattan. Phyllis had shown Jax “her New York” and they needed a place to relax, so they sat down in Ryan’s Bar.

Nina quickly realized that she knew this bar, and that it was across the street from where Silas Clay (Michael Easton) used to work.

Nina explained to Jax about how Silas used to meet his mistress at this bar, and that the mistress was Ava Jerome Cassadine (Maura West).

Nina went on, explaining how her mother Madeline Reeves (Donna Mills) paid Ava to have an affair with Silas because she didn’t want Nina to end up pregnant with Silas’ baby and produce another heir to the fortune.

Jax learned all about how Madeline injected Nina with a drug to induce a miscarriage, but that it caused a coma which robbed Nina of 20 years of her life.

Jax absorbed all this information, and as Nina was talking about Silas, she realized where she heard the name Phyllis Caufield, who was the woman who had the heart pendant cut in half all those years ago.

Meanwhile, in Monte Carlo, Robert Scorpio (Tristan Rogers) and Olivia Quartermaine (Lisa LoCicero) entered the honeymoon suite in a hotel, which was the only room available to them.

Robert got a phone message saying that the call that was supposedly from Holly Sutton (Emma Samms) came from a nearby casino that was formerly owned by Cassandra Pierce (Jessica Tuck). Robert bristled, since the casino hosted some dangerous clientele.

Robert agreed, but he insisted that Olivia would have to leave on his orders if it got too dangerous. Robert and Olivia got spiffed up, then they left for the casino after Olivia left a voicemail for Ned Quartermaine (Wally Kurth). Olivia left her phone behind in the hotel.

At the Metro Court, Sasha Gilmore (Sofia Mattsson) rushed in, late for her meeting with Lucy Coe (Lynn Herring). Sasha said she was feeling sluggish this morning, and Lucy chastised her for being late.

Elsewhere, Ned left a voicemail for Olivia, then he approached Lucy and Sasha’s table. Ned wanted Lucy to pledge her ELQ vote to him, but Lucy refused.

Ned blustered on about how Lucy was a traitor to the family, but Sasha stood up and told Ned that it was his own family’s fault for selling their stocks. Ned apologized, and Lucy left. Sasha and Ned talked some more, and Sasha offered to get Ned into see Brook Lynn Quartermaine (Briana Lane) at the hospital later.

At the hospital, Elizabeth Baldwin (Rebecca Herbst) tended to Brook Lynn, who was preparing to leave the hospital against medical advice, when both Nikolas Cassadine (Marcus Coloma) and Michael Corinthos (Chad Duell) arrived.

Nikolas asked Elizabeth if they could talk about their kiss earlier, but Elizabeth said no, and that she wanted to forget that it ever happened. Out at the elevators, Franco Baldwin (Roger Howarth) arrived and talked with Kevin Collins (Jon Lindstrom) and Felix DuBois (Marc Samuel).

Britt Westbourne (Kelly Thiebaud) walked up and Felix and Franco learned that she was the new chief of staff. Felix was horrified, and Franco seemed ok with it.

As Britt was talking with Franco, Julian Jerome (William deVry) got off the elevator and Britt noticed. Elizabeth and Nikolas walked up, and Britt gleefully told Franco that art therapy might be discontinued at the hospital.

Britt walked off, and Elizabeth explained about how her hours were cut back and Epiphany Johnson (Sonya Eddy) was moved to an administrative position.

Kevin thought that sounded absurd, and he noted that this was all Cyrus Renault’s (Jeff Kober) doing. Kevin thought that Cyrus wanted free reign to make changes to his benefit, and that’s why he was getting rid of people who knew how GH worked.

Over in a hallway, Britt tracked down Julian, who didn’t want to have anything to do with her. Britt thought that Julian was avoiding her, and she wondered if it was because she knew that he was in on the baby switch.

Felix lurked around the corner and listened while Britt told Julian that he’d have to live with someone knowing his deepest, darkest secret, and as she referenced their former “friends with benefits” status.

Later, Felix ran into Kevin, and told him that he just overheard Britt talking with Julian and that they were “bed buddies.” Felix said that something just felt off here, and Kevin suspected that Britt wasn’t actively involved with Cyrus’ big plans, but that she might be willing to look the other way.

At Turning Woods, Ava told Sonny Corinthos (Maurice Benard) that she could take their daughter for the time being, to help out during this time with Mike. Sonny said that was ok under one condition – she couldn’t take their daughter to Wyndemere. Sonny offered the cabin for Ava’s use, and Ava agreed.

In Mike’s room, Jason Morgan (Steve Burton) talked softly to Mike, saying that he’d keep the family safe. Jason said that he admired Mike for making peace with Sonny, and that Mike had given Sonny what he needed – a chance to forgive him.

Jason told Mike thank you for that, and that he was a good father and that he should be proud. Jason gently touched Mike’s shoulder.

Michael sat with Mike next, telling him about Wiley Quartermaine Corinthos (Erik and Theo Olson). Michael imagined having Mike around to help him with Wiley, and in his vision of what the future would have looked like with Mike, Mike told Michael that he would be the best dad.

Michael told Mike that he was a better man for having known him, and soon Sonny came into the room. Michael noted that Mike’s breathing was getting slower, and Sonny said that it wouldn’t be much longer.

Back at the hospital, Sasha and Ned walked into Brook Lynn’s empty room. Jason wheeled Brook Lynn in, and Sasha made herself scarce so that Ned and Brook Lynn could talk.

Brook Lynn wasn’t thrilled to see her dad, and Ned tried again to apologize. Brook Lynn rejected Ned’s plea, and told Ned that he slammed the door in her face and that he needed to leave.

Ned left, but he left his phone behind, and when the phone dinged, Brook Lynn hacked into it and listened to Olivia’s voice mail message from earlier, in which Olivia said that she was with Robert and that she’d explain everything when she got home. Brook Lynn found that interesting.

Near the nurses’ station, Nikolas lurked as Franco and Elizabeth talked. Franco’s phone dinged about a possible new commission, and it appeared that Nikolas sent the message to get rid of Franco.

Nikolas then approached Elizabeth saying that perhaps he could offer the hospital board more money than Cyrus did, but Elizabeth didn’t want to talk, and she walked off.

Nicholas then got a call from Ava saying she wouldn’t be coming home that evening, and Nikolas wondered what was up, but Ava didn’t tell him about going to the cabin. “Careful, you almost sound jealous,” Ava said.

Finally, Jason walked up to Elizabeth at the nurses’ station saying that he just dropped off Brook Lynn. Elizabeth shared that Britt was the new chief of staff, and that Cyrus was responsible for that, along with the demotion of her and Epiphany and others.

Jason said that Cyrus was trying to get rid of the old guard who knows how the hospital runs. “He wants to keep you away from what he’s planning,” Jason said.

That was a great episode of General Hospital, and there’s plenty more action coming tomorrow, so don’t miss it! We’ll be sure to keep you current on all the latest GH spoilers and news – you can count on CDL for all your soap updates!