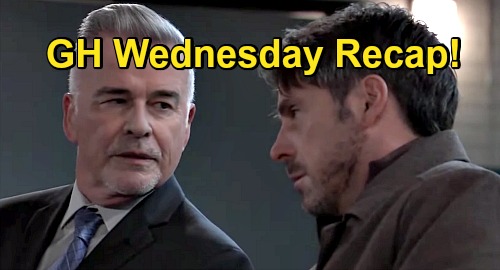 General Hospital (GH) spoilers recap for Wednesday, December 16, reveal that Julian Jerome (William deVry) walked into a bus station in Secaucus, New Jersey with a nasty bullet wound on his side and a bus ticket to Montreal.

Julian’s bus was delayed for an hour, so he sat alone in the bus terminal. Suddenly a person sat down beside him, and it was Duke Lavery (Ian Buchanan).

“You’re not real, Duke, you’re dead,” Julian drawled. Duke needled Julian about his death, and he told Julian that his time was up. Julian insisted that he wasn’t the one who killed Duke, and Duke said that he had someone else to the dirty work for him.

Just then, Connie Falconeri (Megan Ward) appeared, and Julian insisted that he wasn’t responsible for her death – Ava Jerome Cassadine (Maura West) was.

Connie said that Ava killed her to protect Julian, and that Julian manipulated Ava into doing it. “She’s just another pawn to you,” Connie said.

Suddenly, Alexis Davis (Nancy Lee Grahn) showed up in Julian’s hallucination and taunted him for taking a knife to her throat. “My sister was threatening my entire family,” Julian said. Alexis didn’t buy it.

Alexis, Connie, and Duke continued to taunt Julian, and Alexis said that Julian could balance the scales of justice by dying. Julian got weaker, and soon his hallucination ended, just as Julian fell unconscious, dropping his bus ticket as an announcement said that his bus was boarding.

Back in Port Charles, Carly Corinthos (Laura Wright) and Josslyn Jacks (Eden McCoy) were talking at the Metro Court when Cyrus Renault (Jeff Kober) walked in the dining room.

Carly told Josslyn that she needed to leave now, and Carly rushed up to Cyrus and told him to stay away from Josslyn and her friends. Cyrus was amused as Carly said that he didn’t want a war with her.

In Brooklyn, Sonny Corinthos (Maurice Benard) and Jason Morgan (Steve Burton) met with Brick (Stephen A. Smith) for help in tracking down Julian. Brick said that he could use some new facial recognition software to search for any signs of Julian.

Sonny told Brick to do what he had to do. Sonny then got a call from Carly and learned that Cyrus had approached Trina Robinson (Sydney Mikayla) about Marcus Taggert (Réal Andrews) being alive.

Jason and Sonny then talked about their plan to keep Julian alive until they got information against Cyrus, and Brick reappeared, saying that Julian was spotted waiting for a bus to Canada in New Jersey. Jason said that it was nearby, and Sonny said that Julian wasn’t getting away this time.

At GH, Nikolas Cassadine (Marcus Coloma) stood in Ryan Chamberlain’s (Jon Lindstrom) room as Ryan was catatonic in bed. Britt Westbourne (Kelly Thiebaud) walked in and removed Nikolas from the room, quickly learning from Nikolas that his marriage to Ava was now real.

Elsewhere in the hospital, Portia Robinson (Brooke Kerr) was leaving an angry message for Trina when Ava approached wondering what was wrong. As it turned out, Portia had learned that Trina skipped the last two days of school.

Ava said that Trina hadn’t been at the gallery, and she suggested that perhaps Trina needed time to grieve Dev Corbin aka Dev Cerci (Ashton Arbab).

Over in the park, Trina talked with Jordan Ashford (Briana Nicole Henry) while Taggert hid in the bushes. Trina was bristly toward Jordan at first, and she said that she and her friends were trying to prove her dad’s innocence.

Jordan told Trina that her dad had indeed fabricated evidence against Cyrus, but that didn’t make Taggert a bad man.

Jordan explained how frustrated Taggert was at the deaths that occurred because of Cyrus, and that Taggert and their colleagues had made a choice. Trina seemed to accept this, then she got a call from Ava saying that she needed to go see her mom at GH right now.

Trina left and Taggert emerged from the bushes, happy to have seen Trina again.

Jordan told Taggert that he needed to get out of Port Charles before Cyrus tried to kill him again. Jordan and Taggert hugged, acknowledging that they were partners again, working together to protect Trina.

Suddenly, a gunman appeared in the brush, and Jordan pushed Taggert down and shot the gunman.

The gunman died right after saying that his boss had him tail the girl to draw Taggert out of hiding. Taggert and Jordan were stunned, and they both realized that Trina was no longer safe. “I need to take you to the one place I know Cyrus can’t get you,” Jordan said. “Do you trust me?”

Back at the hospital, Ava found Nikolas talking to Britt outside of Ryan’s room. Alarms started blaring from Ryan’s room, and Britt rushed in the room, then returned to Nikolas and Ava.

Mac Scorpio (John J. York) materialized, and Britt said that Ryan had regained consciousness, but that he was in a persistent vegetative state.

Ava rushed into Ryan’s room and got in his face and told him that this was the perfect outcome for him – a purgatory of nothingness. “I hope you suffer for a very long time,” Ava said. “This is the last time you’ll ever see me.” Ava left with Nikolas, and once alone, Ryan smirked slightly.

Elsewhere in the hospital, Trina arrived and talked with Portia, who insisted that Trina tell her what was going on and why she’d been cutting classes. “I can’t tell you,” Trina said. “If I’m wrong, I’ll only hurt you.”

Eventually, Portia convinced Trina to spill, and Trina said that Cyrus told her that Taggert was alive.

Back at the Metro Court, Josslyn and Carly regrouped, and Josslyn peppered Carly with questions about whether Taggert faked his own death. Carly danced around the questions successfully.

Meanwhile, in the park, Mac met with Jordan and saw the dead body on the ground. Mac wondered if it was self-defense, and Jordan said that she killed the guy to protect someone else. Taggert walked out of the bushes, and Mac looked stunned.

In Vermont, at the long-term care facility, Curtis Ashford (Donnell Turner) learned from the receptionist that all patients get a sedative on their first evening in residence.

Curtis raced into Laura Collins’ (Genie Francis) room and stopped the doctor from administering the sedative, saying that Laura was allergic to the sedative. Laura kept pretending to be catatonic.

The doctor stepped out of the room, and Curtis told Laura that Florence Gray was in Room 2 on Laura’s floor. Laura said that she’d find Florence after the lights went out for the evening. Curtis wasn’t thrilled about the plan, but he agreed.

Later, after lights out, Laura entered the room of Florence Gray and nearly touched her hand when someone rattled the doorknob of the room from the outside.

That was a fantastic episode of GH, and there’s plenty more coming tomorrow, so be sure to tune in! Keep CDL handy for all of the latest sizzling General Hospital spoilers, updates, and news. We’ve got you covered!