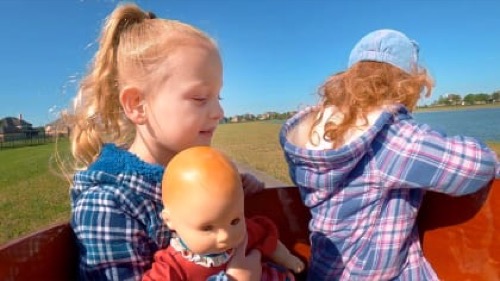 Tonight on TLC Outdaughtered the reality show starring the Busby family returns with an all-new Tuesday, June 30, 2020, episode, and we have your Outdaughtered recap below. On tonight’s Outdaughtered Season 7 Episode 4 finale “Quints In Quarantine,” as per the TLC synopsis, “As coronavirus takes hold, the Busbys must quarantine in their home. In this entirely self-shot episode, the family of eight celebrates birthdays and Easter, fights off cabin fever and tries to stay sane as they spend weeks on end cooped up together.”

So make sure to bookmark this spot and come back from 9 PM – 10 PM ET! for our Outdaughtered recap. While you wait for the recap make sure to check out all our television recaps, spoilers, news & more, right here!

Due to the spreading of the coronavirus outbreak, the decision was made to shut down the production with the Busby Family. The camera crews left. The production team is gone and so the family is now just filming themselves. They’re filming themselves with at-home cameras. It is their wish to document their time during this pandemic and so far cabin fever hasn’t set in yet. Both Adam and Danielle have been keeping their girls distracted. They created fun games for getting dress and they put on fashion shows. They even celebrated Easter at home. The parents also had to explain to their children that there wasn’t going to be a birthday party this year.

The quintuplets are turning five. They usually would get a huge party with tons of friends and family being there. Only they couldn’t do that this year because of the social-distancing mandate. They couldn’t have a huge party and so the girls will just have to make do with their presents. The parents had already gotten the presents. They also discussed amongst themselves about bringing back the Easter Bunny. The girls needed something to celebrate and having an Easter Bunny at their family celebration would help lighten the mood. They especially needed it after weeks in quarantine.

It was fine in the beginning. It was a different story now after so many weeks, The girls and their parents hadn’t thought this thing would drag on. They thought it would blow over soon. It, therefore, came as a surprise to find themselves locked in for almost a month and it wasn’t exactly a nice surprise. The house started to feel too small after a while. The kids were getting on each other’s nerves. They were cranky all the time and that made things worse for their parents because the kid still needed to do their schoolwork. They couldn’t go to school. Their parents had to take over their education and Adam and Danielle also had to tweak the lesson plan to fit their children.

The kids tried to get away with things they normally would have at real school. They pushed their parents to the limit and then came their birthdays. Their parents brought in cupcakes for the kids. The kids all received calls from their family members and everyone remained on the line as the family sang “Happy Birthday” to all six girls. The quintuplets and their older sister’s birthday was so close together that the family was used to combining both events. Which usually isn’t a problem. It was this time because the girls all wished they could leave the house and sadly none of them could. They had to follow the rules.

Their city issued a stay-in-place order. Everyone has to stay at home unless they’re deemed essential works and neither Adam nor Danielle is. The couple was stuck at home with six children. It wore down their patience and sometimes they couldn’t even tolerate each other. Danielle managed to escape from her kids by hiding in her car. She considered her time there as her quiet time and it gave her the opportunity to finally touch base with her friends. She’s friends with a lot of people who own a small business. They’ve had to shut down. Sometimes for good because they couldn’t keep up to date on their leases and so Danielle tried to be as supportive as she could.

Then there was their oldest Blayke. Blayke has no one her age in the house and so she’s been acting out. She’s been very temperamental since this lockdown. Her parents have tried to be understanding, buts its getting to them and they even had to ignore it during Easter. Easter came and went. The family celebrated by having their own egg hunt. The girls enjoyed that and they still got to attend church because this year their church live-streamed their Easter ceremony. The only downside to Easter had been the Easter Bunny. Their dad had frightened them to death with that costume.

The girls had literally cried their eyes out upon seeing the Easter Bunny. He hadn’t frightened them last year and so this year was different. Danielle asked her girls why they were scared. They couldn’t really give her an answer and it just was. They didn’t like the Easter Bunny. They also realized there was a man inside and thankfully they didn’t know it was their daddy. They still thought daddy and the Easter Bunny were two different people. They also thought the Easter Bunny had hopped away and other than that they had enjoyed Easter. They soon forgot about all their fears as the lockdown continued.

Their dad took them on a bicycle trip to keep them occupied. Danielle also had to go into the office to handle her online business and so she would take Blayke with her. Blayke enjoyed having a quiet moment without her sisters there. She loved going into the office with her mom and it would be some good quality time for them. Like they would talk about things. The younger girl opened to her mother and she made Danielle think. Danielle is proud to be raising such a self-aware child. She tends to feel reassured after her conversations with Blayke and that meant something good was coming out of this lockdown.