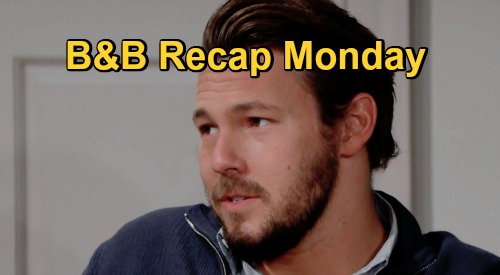 After some small talk about how Ridge Forrester (Thorsten Kaye) is back together with Brooke Forrester (Katherine Kelly Lang), Liam and Steffy turned their conversation to Steffy’s recovery, and Liam praised her for the strides that she’s made.

Steffy said with a smile that she had to get back to Kelly Spencer (Colette and Avalon Gray), and Liam showed Steffy some videos of Kelly playing and laughing.

Liam hoped that Steffy wasn’t worried about Kelly, and Steffy said that she knew that Liam and Hope Spencer (Annika Noelle) were taking good care of her.

As Liam and Steffy were talking, John “Finn” Finnegan (Tanner Novlan) walked in, and Liam and Finn agreed on Steffy’s amazing progress. Liam was clearly uncomfortable as Finn discussed Steffy’s progress and totally beamed at her.

Steffy and Finn looked at each other happily, making Liam even more uncomfortable.

Liam then took the opportunity to praise Finn for going the extra mile to help Steffy, and he started rambling a bit about how Finn didn’t see the signs of Steffy’s drug abuse.

Finn pointed out that he was no longer Steffy’s doctor, and Steffy chimed in that Finn was her advocate, and that she was very grateful.

Liam again praised Steffy, saying that she was a fighter and that when she crossed the finish line, then he and Kelly would be waiting for her. “Don’t worry, I’ll make sure Steffy gets home to Kelly soon,” Finn promised. Liam squirmed uncomfortably.

Later, after Liam left, Finn and Steffy talked alone. “I thought he would never leave,” Finn joked, prompting a smile from Steffy.

Finn noted that he was getting the feeling that Steffy wasn’t too easy to get over, and he said good-naturedly that he thought that he and Steffy would be together for a good long while once she gets rid of her guard dog.

Steffy said that she was looking forward to spending time with Finn when she’s out of rehab, and Finn said, “I should warn you – you might like me a lot.” Steffy and Finn continued talking, and Finn said that he understood Liam’s attachment to her.

Steffy replied that she and Liam genuinely care about each other and will be forever connected through Kelly.

“Yeesh, that’s a lot of baggage,” Finn said, joking. Steffy and Finn continued to happily banter, and Finn remarked that Steffy means a lot to him and that he can’t wait for her to go back to her amazing life. “A life I hope I can be a part of,” Finn said. “I’m excited to see where this goes.”

Meanwhile, in the Forrester CEO office, Hope talked with Zende Forrester Dominguez (Delon de Metz) and Zoe Buckingham (Kiara Barnes). Hope promised not to pry about Zende’s split with Nicole Avant (Reign Edwards), and she mentioned that she’d like to use Zende for Hope For The Future.

Hope pointed out that this meant that Zende and Zoe would be working together a lot.

Thomas Forrester (Matthew Atkinson) walked in as Zende was asking about how Steffy was doing. Tomas quipped that Steffy shouldn’t have gotten hooked on the pain meds in the first place, then he asked Zende about Nicole. Zende said that he and Nicole weren’t together anymore.

Thomas then revealed that he was coming back to work, and that he’d been working hard on himself. Thomas turned to Hope and said that he had been working on some ideas for Hope’s next collection. “Actually, I’ve decided to work with Zende primarily,” Hope said.

Thomas told Zende that he’s grown as a designer, and Zende wondered what Thomas had to say for himself after all the stuff that went on with Hope and Zoe this past year.

“Kind of lost your perspective, huh?” Zende asked. Thomas explained that he was better now, and that he had made mistakes and owns them.

Later, Thomas and Hope talked alone at Thomas’ request. Thomas noted that Zende wasn’t talking about what happened with Nicole, and that he could have played a big part in that, yet he was passing judgment on Thomas. Hope didn’t think that’s what Zende was doing, and she asked why Thomas wanted to speak with her.

Thomas said that he’d put Hope through a lot, but that as a professional he had never disappointed her. Thomas went on about how he’s the Forrester heir and a good designer, and that he’s the best. “I’m the person you should be working with, not Zende,” Thomas said confidently.

While Thomas and Hope were talking, Zende and Zoe moved to the Forrester design office, where Zende asked Zoe if she believed Thomas’ “I’ve seen the light” spiel. Zoe said that she wanted to, and she wondered if Zende believed Thomas. “I’ll be keeping my eye on Thomas,” Zende said.

At Spencer Publications, Bill Spencer (Don Diamont), Justin Barber (Aaron D. Spears), and Wyatt Spencer (Darin Brooks) sat in Bill’s office together. Bill was feeling crappy about putting Steffy in a position in which she became addicted to painkillers.

Wyatt urged his father not to blame himself, but Bill insisted that Steffy’s addiction wouldn’t have happened but for the accident.

Wyatt noted that Steffy had a lot of support, and that she’d get through this. Later, Bill was trying to concentrate when Liam came in and poured himself a drink.

Bill could immediately tell that Liam was concerned about something. Liam grumped about Finn, wondering how he’s supposed to trust the guy after he didn’t see Steffy’s developing addiction.

Bill pointed out that it wasn’t about whether Liam trusted Finn; the key was whether Steffy trusted him. Bill then said that Steffy needed all the support she can get and that he had put her in this terrible situation. “I think about her all the time and wonder how she’s doing,” Bill lamented.

Liam noted that Steffy was still vulnerable, which Bill didn’t doubt it. Liam then said that alarm bells went off when Bill said stuff like he was always thinking about Steffy. “She needs space,” Liam said.

“Are you this protective of Steffy with everyone, or just with me? Bill asked seriously. “Are you telling me to stay away from Steffy?”

That was a great episode of B&B, and there’s lots more coming this week, so stick with then CBS soap! We’ll keep you up to speed on all the latest Bold and the Beautiful spoilers and news as well. Here at CDL, we’ve got you covered!