The Bold and the Beautiful Spoilers: Thomas Harms Himself & Others – Matthew Atkinson Talks B&B Future, Is Redemption Possible? 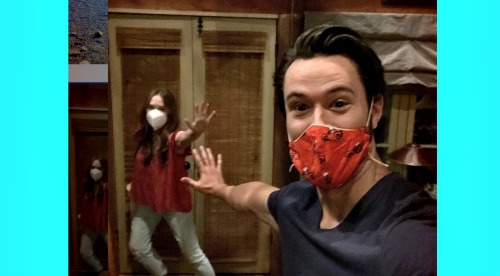 The Bold and the Beautiful (B&B) spoilers reveal that Matthew Atkinson (Thomas Forrester) is speaking out about the shocking mannequin story, which is creating plenty of buzz in the soap world.

Atkinson spoke with Soaps in Depth about what’s really going on in Thomas’ head and offered up some hints about where things are headed next.

Although Thomas has been portrayed as having a fixation on Hope Spencer (Annika Noelle) in the past, Atkinson insisted that’s not what’s going on here. This goes beyond obsession and finally gives B&B writers a chance to explore Thomas’ mental illness.

Atkinson likes the idea of this sparking some mental health discussions since it’s such an important topic. The Bold and the Beautiful star suggested that isolation can make matters worse like in Thomas’ case. There’s major psychological suffering going on for Thomas, so Atkinson hopes people can see that.

Of course, Atkinson hasn’t lost sight of the soapy aspect in all of this. The Hope mannequin will lead to some dark and twisted drama, so B&B viewers should be ready for anything.

“I can’t tell you how deep it’s gonna go, but I will say that it definitely is a very serious thing that’s happening to him and… man, it’s gonna be a wild ride!” Atkinson assured fans.

Since Thomas isn’t in a good place at all, Atkinson admitted there’s “absolutely” the potential for Thomas to harm himself or others. Still, Atkinson was quick to point out that Thomas isn’t choosing these horrible Hope issues.

Thomas is just going through a mental health crisis that needs to be addressed through professional help.

Atkinson argued that Thomas needs to be honest and get the assistance he needs. That could be crucial if Thomas is going to stick around!

The Bold and the Beautiful spoilers say the show will let Thomas sink to some truly troubling places, but Atkinson remains hopeful about the character’s future.

“I still think that Thomas is a redeemable character,” Atkinson said. “I hope everyone else does, too.” Since Atkinson is a fantastic actor and an asset to the cast of B&B, plenty of fans are rooting for a positive change in Thomas!