The Bold and the Beautiful Spoilers: Thomas Wants Logans Out of FC, Shocking Death Strikes – Will B&B Kill Off a Logan? 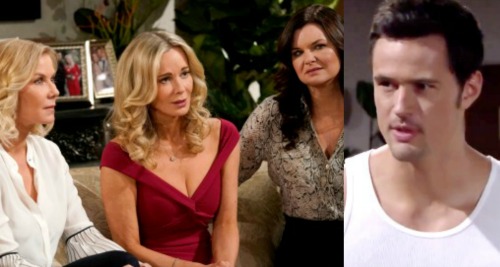 The Bold and the Beautiful (B&B) spoilers tease that Thomas Forrester (Matthew Atkinson) will revive his efforts to rid the Forresters of the Logans. He wants them out of the company and out of their lives – with the exception of Hope Logan (Annika Noelle) of course.

Thomas will always have a special place in his heart for Hope, but his obsession will die down a bit in the months ahead. Although Thomas will still want a future with Hope, he’ll recognize that it may not happen and will choose to focus on Zoe Buckingham (Kiara Barnes) instead.

Perhaps freeing his mind from this Hope fixation will make room for some Logan battle plans. Thomas will definitely stir up some trouble with his mission, which will tie in plenty of characters.

Ridge Forrester’s (Thorsten Kaye) love life will play a huge role in all this. The Forresters and Logans will take sides, which will add to the tension. Quinn Forrester (Rena Sofer) will be on Shauna Fulton’s (Rena Sofer) team, so she’ll be going up against Brooke Forrester (Katherine Kelly Lang) and her sisters.

Katie Logan (Heather Tom) and Donna Logan (Jennifer Gareis) will be quite involved in the war ahead. Eric Forrester (John McCook) will fail to keep the peace despite his good intentions.

Bill Spencer (Don Diamont) will even be part of the mayhem due to his connection to Katie and hatred for Thomas. He’ll step up for the Logans and fight for their place at Forrester Creations.

This seems like a major storyline and a way to pull in tons of characters. Could this conflict set up the shocking death that’s looming in 2020? B&B is staying tight-lipped on most of the details, but we do know a beloved character is set to die this year.

With all the emphasis on a Logan-less future at Forrester, could one of the Logan women face a grim fate?

Brooke and Hope clearly aren’t going anywhere. Katie is probably safe as well, but what about Donna? She’d be considered a beloved character, but her death wouldn’t really matter in terms of what storylines B&B can do.

With the other Logans, a void would be felt. The same can’t be said for Donna, who just kind of floats around in other people’s stories.

Donna’s death would have an emotional impact without drastically altering the canvas or the plot. Could this battle Thomas sets in motion somehow lead to Donna’s demise? Could there be a more innocent explanation instead?

Whatever the case, The Bold and the Beautiful will need something to bring everyone together at the end of this war. The death of someone like Donna might do it.

Nothing’s set in stone yet since it should be a while before anyone gets killed off. Still, it’s an interesting mystery to ponder and worth thinking about as we build to the deadly drama.

Who do you think will die in 2020? We’ll give you updates as other B&B news comes in. Stay tuned to the CBS soap and don’t forget to check CDL often for the latest Bold and the Beautiful spoilers, updates and news.