The Bold and the Beautiful Spoilers: Wednesday, March 18 Recap – Shauna Shows Quinn Video of ‘Brill’ Kiss – Sally Tells Escobar To Back Off

BY hellodrdavis on March 18, 2020 | Comments: one comment
Related : Soap Opera, Spoiler, Television, The Bold and the Beautiful 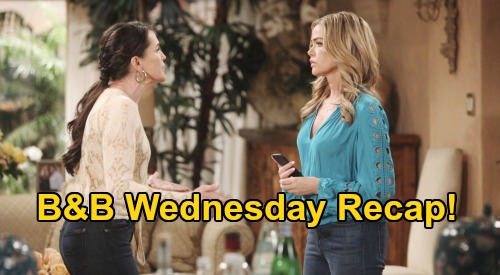 The Bold and the Beautiful spoilers recap for Wednesday, March 18, reveal that Ridge Forrester (Thorsten Kaye) brought a nice breakfast to Brooke Forrester (Katherine Kelly Lang). They happily enjoyed each other’s company over coffee and fruit, and Brooke said that she was glad that Ridge never filed the divorce papers. Brooke and Ridge agreed that they never wanted to be apart again.

Ridge pledged that they’d only look forward from now on, and they each verbalized their commitment to each other. Ridge then said he had a surprise for Brooke, and he presented her with a digital picture frame that he filled with pictures of their life together. Brooke loved the gift, saying it was a great way to remind her of their past memories.

Ridge said he sent a link to everyone in the family so they could upload the pictures, too, and Brooke said that they’d have plenty of new memories to add going forward. Brooke and Ridge declared their love for each other, then started kissing and fell back onto the bed.

Meanwhile, at Spencer Publications, Bill Spencer (Don Diamont) talked with Katie Logan (Heather Tom). He noted that Brooke had been right about Thomas Forrester (Matthew Atkinson), and they rehashed the wedding fiasco. Talk soon turned to Wyatt Spencer (Darin Brooks) and Sally Spectra (Courtney Hope), and Bill praised his son for doing what’s best for Sally in her time of need.

Katie wished that Sally would come clean with Wyatt about her illness so they could stop the charade, and Bill praised Katie for helping Sally. Bill even said that Ridge had done a good thing in featuring Sally’s designs in Forrester Creations’ couture line. Bill and Katie kissed, and Katie praised Bill for his support through her health scares. Later, when alone, Bill daydreamed about his kiss with Brooke, then gazed at a picture of Katie and Will Spencer (Finnegan George) on his desk.

Next, at Wyatt’s place, he asked what Sally wanted for breakfast, but she didn’t have much of an appetite. Wyatt didn’t press the issue, and he helped Sally as she spilled some orange juice on the coffee table due to her shaking hands. As they talked, Dr. Penny Escobar (Monica Ruiz) sent Sally an urgent text. Wyatt wondered who was texting, and Sally covered.

Soon, Dr. Escobar sent a second, more urgent text, and Wyatt asked if everything was ok. Sally said that everything was great, since she was here with him. Wyatt went to shower, and Dr. Escobar called Sally, who blasted the doctor for reaching out. Dr. Escobar said that she had no choice since Sally wasn’t answering her texts. She asked Sally to come to her office now, but Sally cut her off.

Over at the Forrester mansion, Shauna Fulton (Denise Richards) visited with Quinn Forrester (Rena Sofer) about last night’s wedding fiasco. Shauna asked if Ridge was back with Brooke, and if he had spent the night at the Forrester mansion. Quinn said no, but that “Bridge” had a history of breaking up and making up. She encouraged Shauna to bide her time.

Shauna quipped that Ridge was “all in” in his relationship with Brooke, but that she didn’t know if Brooke was. Quinn went off on Brooke, specifically mentioning how Brooke worked her way through the Forrester family and got involved with Katie’s husband. Shauna then admitted that she saw something that she couldn’t get out of her mind and that makes her concerned for Ridge.

Shauna wondered about Brooke’s betrayal of Katie with Bill, and Quinn asked why Shauna was so interested in that. Shauna said that perhaps Brooke wasn’t worthy of having Ridge, and that she was completely caught off guard by something. She then whipped out her phone and showed Quinn a video of Bill and Brooke kissing in the cabin.

Shauna said she still wasn’t sure why she took the video, and Quinn gasped, “Oh my God, when was this?” Shauna said it was the night before the wedding. Shauna wondered aloud how Brooke could to this to Ridge, and she asked Quinn if Brooke was playing Ridge for a fool. Quinn was thrilled and smiled big, clearly happy to have this evidence in hand.

That was a terrific episode of B&B – be sure to stay tuned for more exciting episodes this week! We’ll be sure to let you know as more B&B news comes in. And remember that CDL is your place for Bold and the Beautiful recaps, news, and spoilers – check back with us often.