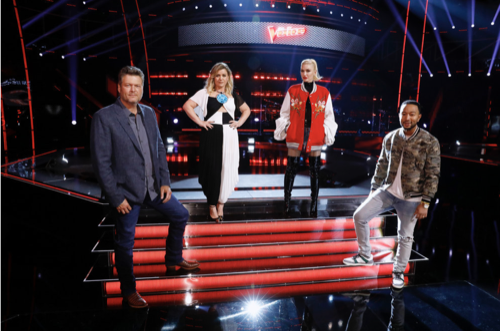 Tonight on NBC’s Emmy Award-winning musical competition The Voice airs with an all-new Monday, November 23, 2020, season 19 episode 10 “The Knockouts Part 2,” and we have your The Voice recap right below. On tonight’s The Voice season 19 episode 10 “The Knockouts Part 2” as per the NBC synopsis, “The “Knockouts Rounds” continue. Each artist is paired against a teammate to perform individually while their direct competitor watches and waits. The coaches alone will choose the winner from each Knockout to advance to the live shows. Each coach will have one steal in the “Knockout Rounds.””

It’s the second night of Knockouts! Over the past few weeks, the coaches have carefully put together a team they believe in. They’ve let some people go and they’ve stolen people from other teams. The coaches have been strategic. They already knew or at least suspected which person on their team was going to make it to the Finals and so the rest of the season is to prepare them. Kelly’s team went first. She has both Desz and newbie Sid Kingsley playing for the first round. Kelly didn’t know Sid as well as she knew Desz and so she was starting to figure him out. Sid was a deeply anxious person. He preferred playing/hiding behind an instrument because otherwise, he gets so nervous that he feels like he’s going to pass out and it’s always a miracle when he doesn’t.

It was therefore a mismatch to have him go up against Desz. Desz has such a strong stage presence that not many people knew she was quite bashful and shy in person. She was meek one second but then was a superstar during the next one. She is an incredible singer and she chose the song “Can We Talk”. Desz received help from her coach as well as the Mega Mentor Usher. Usher told her to go easy on her song for the first half because she needed to draw people in with her presence and then he said she should hit those high notes towards the end. Desz did as he suggested. She sounded amazing like always and so the surprise was Sid. Sid performed the song “Make It Rain” and he was damn good. He actually made Kelly’s choice really difficult.

Kelly didn’t know that she was going to be so confused. She probably thought that whoever she put against Desz wouldn’t be as great and so again Sid surprised her. Sid had been amazing. Kelly had a hard time choosing between Desz and Sid. She ultimately chose to go with Desz because she knew someone would Steal Sid. She wasn’t wrong about that and it was two coaches that wanted him for their teams. Both John and Blake wanted Sid. His performance tonight had shown them incredibly range and soul. The coaches wanted to have someone like that on their team and they were prepared to use their Steal knowing that they wouldn’t be able to grab other artists in the future. And so Sid had to choose between the two.

Sid chose to join Team Blake. He said he disappointed his mother once by not joining Blake’s team when he had the chance during the Blinds and so he was choosing him now. Team Blake also went next. He paired Jim Ranger with Jus Jon. They were from two vastly different genres. The only thing the men have in common is that they were both described as having a unique spirit and it was Usher who said that. Usher also said both Jim and Jus Jon were two of his favorites. He likes watching them perform. He especially enjoyed their performance during their rehearsal sessions and he liked the songs they chose. Jus Jon chose the song “Finesse” which is an upbeat Pop song with some elements of Rap.

Jim chose the song “Humble And Kind”. He first heard the song when he was with his kids and he knew that was something he wanted to teach his own children. He wanted them to grow up to be good people. This song, which is originally a Country song, has an emotional connection for Jim. He showed off new sides of his voice with his performance of this song and he wasn’t alone in impressing his coach. Jus Jon did pretty good as well. His chest voice was great and the song was fun. Jus Jon is fun to watch. It didn’t have the same impact as Jim because there was a very important message behind Jim’s song. So, in song selection, Jim won. Jim also got teary-eyed as he explained why he chose this song and that drew people to him.

Blake picked Jim as the winner of this Knockout. Jus Jon was eliminated when none of the other coaches chose to Steal him and so hopefully this doesn’t get him down. With Team Blake’s battle over, it was Team John’s turn. John paired Bailey Rae with Lauren Frihauf. The two women were coming from different genres. Bailey Rae was a Country artist. She even performs with a twang in her voice and so she was like full country. Bailey even chose a country song to perform tonight. She chose the song “Let Me Down Easy” and she had needed some help in emotionally connecting to the song. She was quite young. It was the only thing she had in common with Lauren because Lauren was just a kid too.

Lauren chose the song “Cry Baby”. She was more Soul than anything else and the song choice had been great for her. Lauren had needed some coaching from the Mega Mentor and Usher did teach her a new technique. Only, in the end, it was a tossup between Lauren and Bailey because both young women had been great onstage. Bailey was amazing with her song because she did get that emotional angle down. Lauren was great with her song because she did put her literal soul on the line for this. It was therefore a tough choice for John Legend. He loved both artists and he ultimately went with Bailey because her performance tonight was just a tad better than Lauren’s. And so Lauren was up for elimination.

Lauren was put on the block. She was given a few minutes to say some nice words to her coach and then she had to go. No one chose to Steal her. Lauren was eliminated and thankfully she was still young. She will have plenty of more opportunities. Next up was Team Blake. He paired James Pyle with Ian Flanigan. They were another one that came from different genres and Blake paired them together because he said the both of them did crazy amazing things with their voices. Ian chose the song “Beautiful Crazy” because it reminded him of the woman in his life. He plays the bar scene and that led him to partying. Messing with too much alcohol. Ian had to pull away from that lifestyle for a bit and now he’s a better person for it. He’s able to be in a long-term relationship now because of it.

James also chose a song that resonated with him. He chose the song “In My Blood” because it reminded him of when he lost his mom as a young man and how horrible it was to work through his grief. James hadn’t always been a part of Blake’s team. He was stolen during the Battles from Team John and so it wasn’t surprising when Blake chose Ian as the winner of this Knockout. The coaches tended to favor the artists that have been with them the longest. Its been like this with Kelly, John, and even Blake. It’s rare for any of the coaches to choose someone they got from the Battles over someone they got from the Blinds. Gwen was the first exception when she chose Joseph Soul over Van Andrew.

Team Kelly went next. She paired Madeline Consoer with Kelsie Watts. Kelsie chose the song “You Oughta Know” because she experienced an emotionally abusive relationship with someone she eventually left. She carries some scars from that relationship. She’s happier now with her husband and he’s a good man. He would never have treated her like her ex did, but Kelsie can still connect to the Alanis Morissette song and so she gave this song her all. Kelsie also wasn’t the only one singing about heartache. Madeline chose the song “Die From A Broken Heart”. She’s had two relationships that have ended horribly and so she wanted to sing about it. Only she didn’t want to be vulnerable. Her coach and Usher had to convince Madeline that he should let her guard down for this song and sing from the heart.

Kelsie didn’t have to worry about that. She let everything she was feeling showed because she knew she would still be standing at the end of it and so Madeline had to borrow some of that confidence. It didn’t come naturally to her. Madeline worked her way up to performing this song and by the time she had her final performance on the stage – it worked. It just all came together. Her voice was beautiful. She pulled people in and the coaches were impressed. They liked Kelsie’s performance only they loved Madeline’s performance and she was so Country that Blake had questioned out loud why she wasn’t on his team. He missed an opportunity with her. His loss was Kelly’s gain and Kelly wasn’t going to let go of Madeline now that she has her. Kelly named Madeline as the winner of this Knockout.

Kelsie got put up for elimination. There had been a chance for one of the other coaches to Steal her and none of them chose to. She was eliminated. It was soon onto the next Knockout. Team Gwen went next. She paired Carter Rubin with Chloé Hogan. They were both powerhouses. They each have such strong voices that it made sense to pair them and up first was Carter. Carter chose the song “You Say”. He said he chose this song because it was hard to be a fourteen-year-old boy in middle school and high school who doesn’t play sports and prefers to sing. He doesn’t quite fit in. This song was perfect for him because he doesn’t fit in and his performance of the song got a standing ovation from the coaches.

Chloé went second. She chose the song “Weak” and it reminded her of what she does for a living. She’s a music teacher. She teaches the history of black music to her students as a way of teaching them about the culture and the struggle that went into the music. Chloé’s song choice had been great for her voice. She brought tone and range to it like crazy. Her performance didn’t sound like Carter’s because he went for those big notes and she did amazing things with the smaller notes. Both performances were great in their own way and so it was a tough one for Gwen. Gwen wanted to keep them both. She ultimately chose Carter as the winner because he really did deliver a flawless performance and it wasn’t long before Chloé was stolen by John.