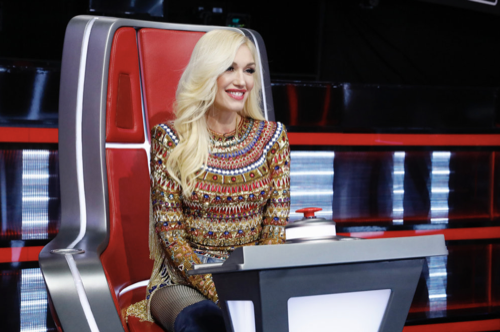 Tonight on NBC’s Emmy Award-winning musical competition The Voice airs with an all-new Monday, November 16, 2020, season 19 episode 8 “The Battles Part 3,” and we have your The Voice recap right below. On tonight’s The Voice season 19 episode 7 “The Battles Part 2” as per the NBC synopsis, “The “Battle Rounds” continue as the coaches enlist music industry powerhouses Leon Bridges (Team Kelly), Miguel (Team Legend), Kane Brown (Team Blake) and Julia Michaels (Team Gwen) to prepare their artists to go head-to-head in the hopes of advancing to the “Knockout Rounds.”

It’s the last day for Battles! The judges were still pairing up members of their teams to battle each other in a voice-off and up first was Team Gwen. She picked Carter Rubin and Larriah Jackson for her first battle. They were the babies of her team. They were both super young and still amazingly talented. They each had an impressive range that Gwen wanted to test with the song “Like I’m Gonna Lose You” by Meghan Trainor. Gwen had to be careful with her babies because she had to use a song that was age-appropriate. It also had to be something they could connect to and so she chose a love song because by their ages they’ve already had crushes if not fallen in love for the first time.

Larriah connected to the song right away. She understood pain because her biological father walked out at a young age for her and she was eternally grateful for her stepfather because he treated her like his own. Her stepdad showed up for every performance. He was supportive and loving, but that will never stop Larriah from questioning why her biological father couldn’t have done that as well and so that pain that stems from that abandonment had helped her with the song. She connected to it more than Carter. Carter has a beautiful voice. He could do wonderful things with it and at the same time, he wasn’t quite hitting the song as much as Larriah was.

Carter had needed to work on his performance more during practice. He eventually got his voice to a great place for the final performance itself and so this battle was a hard one. Both Carter and Larriah shined with the song. She still shined a bit more than Carter because again she connected to the song in a way he hadn’t and the judges noticed this. The judges were favorable towards Larriah. They sided with Larriah and Gwen surprised them all when she chose Carter. Gwen felt Carter had a unique voice. She didn’t want to lose it and so she chose him. She then used her save to keep Larriah and so Gwen walked away with both of her babies.

Next up was Team Blake. Blake chose Aaron Scott and Ian Flanigan for his first battle. They were both rockers. They were rockers of different eras. Aaron leaned into 90s rock and Ian was more modern. Blake gave these guys the song “Have You Ever Seen The Rain” by Rod Stewart. It was a classic rock song and at first, it was just Ian who was sounded great. Ian gave this song his whole being during practice. It also didn’t hurt that he had the guitar and that he could play along to singing the music. There was such a difference between Ian and Aaron that Blake and the celebrity mentor he brought in had to ask Aaron why he was holding back?

Aaron was apparently overthinking this. He left his wife and family back home and he was feeling guilty because he knows how crazy the world has gotten. They were a sudden uptick of new cases popping up in the States. Many places were going through their second wave of the coronavirus and so Aaron was feeling guilty for being safe at a voice competition. He was holding himself back until he talked to his coach. Blake told him that he wanted to hear Aaron give it his everything because he was known for his 90s vibe. And, well, back in the 90s, the singers introduced a rock that was all about emotion.

Aaron took the feedback he received. He channeled his emotions into his music and he produced a much stronger performance to go up against Ian’s. Ian left a family behind as well. He misses them, but he wasn’t going to blow his big chance by feeling guilty and so neither should Aaron. The two men sounded amazing together. They did justice to the song together and Blake ultimately chose Ian because Ian had a voice unlike any other. Blake wanted original for his team. He had to let go of Aaron and so the only good thing about that is Aargon gets to home to his family now. He no longer has to misses them.

Team John went next. He chose for his first battle both Casmè and Rio Souma. They were both R&B. They were soulful as well. They were also super talented and they each knew struggle. Casmè has had to be a superwoman in order to take care of her many siblings and Rio grew up in a tough city for a young black man. They knew struggle and they brought that to their performance. During practice, Casmè was more vibrant. She stood out on stage because she had presence and charisma. Rio had needed to work on that. John and his celebrity mentor had spotted that Rio was struggling and they warned him about it because they were given a tough song.

John gave them the song “You’re All I Need to Get By” by Marvin Gaye with Tammi Terrell. It was a song that many knew and love and so his two artists had to step it up. They had to hit this song perfectly or else it was going to fall flat. Casmè and Rio worked wonderfully together and so the performance they pulled out had been amazing. They each sounded great and they looked great while doing it. Rio did up his stage presence. He brought his A game and the judges had felt torn at who they preferred. Gwen was awestruck by Casmè and Blake was actually staring at Rio the whole time.

John decided to go with Casmè. Everyone loves Casmè because her energy is infectious and they couldn’t help watching her onstage. Rio may have upped his game, but not that much and so tonight he was eliminated. Next up was Team Kelly. Kelly chose to pair Marisa Corvo with Ryan Gallagher. They’ve both been at the competition since the second wave happened and so Ryan had to find out over the phone that his grandmother contracted Covid-19. She was then being cared for by Ryan’s mother and his mother caught Covid as well. His mother soon had to go to the hospital because it got really bad for her. She has a preexisting condition and so hopefully the hospital will be able to help her.

Ryan wishes he was there for his family. Only they wanted him to keep fighting in the competition and he was ready to give this his all. Ryan was a trained classical singer. He performed opera at his audition and that had won over Kelly. Kelly decided to give a song that was a bit like opera. She gave them the song “I Surrender” by Celine Dion and thankfully Marisa knew it really well. Marisa first heard the song at the gay clubs in the city. She also went on to perform this song as she began to perform at restaurants and so she was just as familiar with it as Ryan was and that lent to a great performance.

Both artists knew they had to go big. Marisa and Ryan attacked the song quite differently. They really did battle each other vocally because theirs did not sound like a duet and so Kelly had a tough choice. Kelly had to pick between two great artists. She chose to go with Marisa and then she decided to use her save to keep Ryan as well. Kelly couldn’t bear to lose either of them and so she kept them both. Marisa and Ryan were going into the Knockouts. Kelly was glad she didn’t have to say goodbye to anyone because that’s the part they all struggle with as coaches. None of them wanted to say goodbye to anyone and that’s why the Battles were the hardest part.

Team Gwen was next. She chose Liam St. John and Ryan Berg because they are her rockers and she wanted to see what it would like to have them battle against each other. She gave them the song “I Need A Dollar” by Aloe Blacc. It was a very relatable song because singers sometimes have no idea how they were going to pay rent that month and so both men were able to connect to this song. They just attacked differently. Liam gave the song full steam and there was never a quiet moment or build up with him. Gwen told him to take it easy at first. She said he could show more range that way and she had different advice for Ryan.

Gwen wanted Ryan to go the extra distance. Ryan wasn’t moving or performing. He was just singing and so he needed to borrow some of Liam’s energy. Gwen and her celebrity mentor advised Ryan to play it up onstage. They wanted to see his stage presence and Liam was advised to wheel some of that back. Both guys were great singers. They were given a very difficult song and they gave it their all. The guys gave Gwen her biggest surprise battle. Gwen had no idea where they were going to go with their performance and she was especially caught off guard by Ryan because she saw a swagger to him that she never saw before.

Gwen chose to save Ryan. Liam was eliminated tonight and next up was Team John. John paired Cami Clune with James Pyle and both were adored by the judges. The judges would have given James a four-chair turn if they had just had space on their teams and so John was lucky to win him so quickly. Only they did fight over Cami. Cami impressed them on the first note and the judges all turned for her. With her, they had had space at the time. The judges loved both Cami and James and so that’s part of the reason why John paired them together. John wanted to see a battle among the favorites.

John gave them the song “Wicked Game” by Chris Isaak. He gave them such a difficult song because he had full faith in both of them. He knew they would do wonders with it and he was not disappointed. Cami and James sounded so cool together. They sounded as if they were the original singers of the song and so it was another tough decision for John. John ended up going with Cami because he preferred her stylistic choice. He also loved her voice and thankfully this wasn’t the end of James’s journey. James was “Stolen” by Blake. He’ll join Blake’s Team and he too will go to the next round now.