BY Heather Hughes on January 19, 2020 | Comments: one comment
Related : Soap Opera, Spoiler, Television, The Young and the Restless 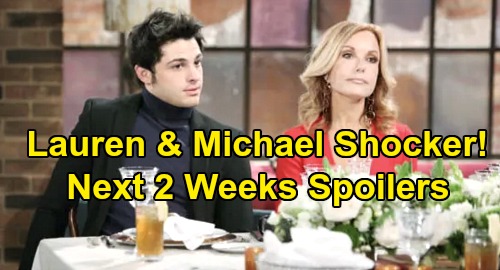 The Young and the Restless (Y&R) spoilers for the next two weeks tease that secrets and heated confrontations will bring drama. During the week of January 20-24, Kyle Abbott (Michael Mealor) will punch Theo Vanderway (Tyler Johnson) and score his cousin some sympathy points with Lola Abbott (Sasha Calle).

Theo will indeed hit on Lola but we’ll see how she reacts. As for Kyle and Summer Newman (Hunter King), their business trip will culminate in a deep conversation and a kiss.

Sharon’s trying to keep things quiet, so that’ll be part of it for Mariah. Another part of it may be trying not to worry Tessa, who’ll head back out on tour. Y&R fans can expect to see more of Tessa and Tanner Watts’ (Chase Coleman) travels soon enough. Tanner doesn’t seem entirely trustworthy, but Tessa can put him in his place if need be.

Back in Genoa City, Fenmore “Fen” Baldwin (Zach Tinker) will drop a bomb on his parents. Lauren Baldwin (Tracey E. Bregman) and Michael Baldwin (Christian LeBlanc) will be floored by Fen’s shocker. Could that involve a new job or perhaps a recovery setback? Regardless, Fen’s mom and dad will have a lot to mull over.

Next, Amanda Sinclair (Mishael Morgan) will hope to establish some boundaries with Billy Abbott (Jason Thompson). It sounds like Billy will cross into an uncomfortable area for Amanda, so she may put him firmly back in the friend zone.

Other Young and the Restless spoilers say Nick Newman (Joshua Morrow) will support Sharon by offering a special gift. He’ll give Sharon a necklace with three charms to represent hope, faith and love. Sharon will be touched by the gesture and will break down over the crisis she’s facing.

Nick will have to keep someone in line later. Could that be Phyllis Summers (Michelle Stafford) if she tries to snark at Sharon? That’s one option to consider. We all know it’s only a matter of time until suspicions are raised about emotional Sharon and what’s up with her.

Whatever the case, Phyllis will deal with a stumbling block. That could involve her friendship with Nick or possibly her “Chance” Chancellor (Donny Boaz) pursuit. Phyllis will seek a date with Chance in the week ahead, but Chance may not be too keen on the idea.

The Young and the Restless spoilers say Phyllis’ schemes will keep Chance and Abby Newman (Melissa Ordway) from spending the night together initially. However, it looks like the lovebirds will succeed during the week of January 27-31. That’s when Y&R viewers will see some flying sparks for Abby and Chance. A hot hookup should be on the way!

As for Billy, he’ll wind up on the hotseat as it becomes make-or-break-it time for his marriage. Victor Newman (Eric Braeden) will also deliver some ammunition to his daughter. He’ll give Victoria Newman (Amelia Heinle) some evidence she can use to her advantage, so that may play a role in how she confronts Billy – or even how she goes after Amanda.

Finally, Devon Hamilton (Bryton James) will make a difficult choice. Will that involve letting go of his Amanda suspicions – or at least planning to?

Could it tie in with Cane Ashby (Daniel Goddard) and the Colin Atkinson (Tristan Rogers) hunt instead? Regardless, Devon will struggle to make this decision and will undoubtedly need Elena Dawson’s (Brytni Sarpy) support.