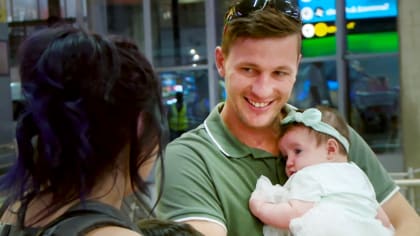 Tiffany, Daniel, and Carley head to South Africa to reunite with Ronald. Corey issues Evelin an ultimatum about their wedding. Laura and Aladin face off over their breakup.”

So make sure to tune in tonight between 10 PM – 11 PM ET for our 90 Day Fiance recap.  While you wait for our recap make sure to check out all our television spoilers, news, recaps, and more, here!

Jesse is now back in New York City. He was going on a blind date. His friends had set it up for him and they had given him little information to go on. Jesse was left with no idea of what to expect. He merely hoped for the best and he met Bianca. Bianca is thirty-three. She’s a teacher, she lives in NYC, and she’s looking for love. Bianca later told Jesse about herself. She’s well-traveled and she was even raised in Israel. She didn’t move to New York until eleven years ago and she’s been enjoying it so far. Jesse liked Bianca right away. He thought she was beautiful and he liked how open she was about herself.

Jesse felt he was deceived in his last relationship. He had dated Darcey and things were great in the beginning. They didn’t change until much later on. Jesse had seen a different side to Darcey by then and it had turned him off. He had hated how their relationship unraveled. He didn’t want to go through that again, but he does like American women and so he left things in his friends’ hands. He agreed to the blind date because he hadn’t trusted his own instincts after Darcey and that’s why this thing with Bianca is such a huge step for him. She could be the first proper relationship after Darcey. And so he didn’t want to ruin it.

Avery meanwhile was meeting her in-laws. This was the first time she was meeting them and she had been nervous because she had wanted them to like her. They had talked online. Avery was afraid it might be different in person and thankfully it wasn’t. His family welcomed her with open arms. They did admit they had been worried at first when they heard he was dating an American woman. They weren’t sure what Omar was getting himself into and now they’ve met Avery – they feel better about her. She was a generous person. She brought them gifts and she was very respectful.

Corey and Evelin had a very different problem. They didn’t have to worry about in-laws because their relationship was incompatible. It wasn’t going to work out and frankly, the writing has been on the wall for years now. The couple met when Corey was traveling. He decided to stop in Ecuador and this was where he met Evelin. Evelin was of Spanish beauty. She took him back to her home town and he’s been traveling from the States to her town for several years. They dated for a while before one of them decided they needed to live together. Corey brought Evelin to the United States and she hadn’t liked it. She had gotten homesick.

Corey then decided to move to Ecuador. It was hard on him because he never learned Spanish and he struggled to adapt to a new environment. His girlfriend Evelin wasn’t helpful at all. She hadn’t wanted to be tied down or to get married and she had these friends that were convincing her to be free. Evelin has been going out partying with these friends. She’s been partying while Corey flew back home to help his mother. Corey’s father had passed away and so he was needed at home, but Evelin wasn’t really respectful of his situation. The truth is she’s never really treated him with respect and their relationship is breaking down because of it.

Then there was Tiffany and Ronald. The two got pregnant really fast and its putting pressure on their relationship. They were now parents to a baby girl named Carley. Carley has never met her father and so her mother was flying out with her kids to see him. Tiffany was also the parent to young Daniel. Daniel calls Ronald “dad” and so they were a ready-made family. They were also going to need things at Ronald’s place. Tiffany has gone over with them with what they need and she’s trying to stay on top of everything. She even wants Ronald to formulate a plan in case the baby got sick while they were in South Africa.

Tiffany was worried. She wanted everything to go right and she didn’t want the pressure to get to Ronald. He was a gambling addict. He was still fresh out of rehab and technically he shouldn’t have jumped into a relationship so fast. He should have focused on himself first. He should have gotten himself right before he had this family with Tiffany and so Tiffany does think about that. Her mother and brother make sure she thinks about that. Her family was concerned about her going back to South Africa because they were worried her trip might not go as she planned it. And her family weren’t all that big on Ronald either.

Laura, however, was alone. Laura and her husband were going through a divorce because she had gone out for coffee. Laura was living in a foreign country at the time and she had waited for her husband to come home. He had gone to the barbershop. He was there for over three hours and so Laura became frustrated. She decided that she was going to get her coffee. She left their home and she got coffee. She came back to a husband that was furious with her. Aladin said she should have told him where she was going. He even accused her of not treating him like a husband and so that’s when divorce was first mentioned.

Laura now has nothing. She used to live with her son and he was leaving to go live in Canada with his dad. Laura used to have a cell phone. Her husband reported the cell phone stolen on his end and so now she doesn’t have a cell phone. Laura used to have a home. She sold it because she thought she was going to live with her husband and now she has nowhere to go. She was staying in a rental. She couldn’t stay there for long and she couldn’t figure out where she was going next. Laura has nothing and her husband refused to listen to her. He felt her getting coffee on her own was a sign of disrespect and there was nothing Laura could say to get him to forgive her.

Tiffany and her family were reunited with Ronald.

Jesse and Bianca went on a second date.

Corey and Evelin discussed where their “relationship” was going.