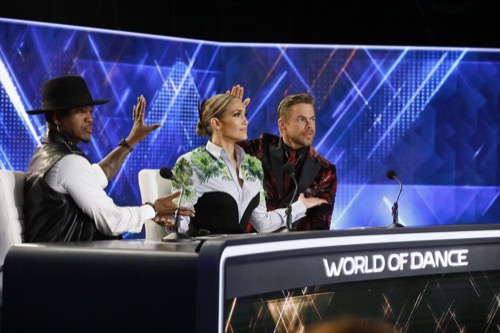 Tonight on NBC the World of Dance’s the fourth season airs with judges Jennifer Lopez, Derek Hough and Ne-Yo with an all-new Wednesday, August 12, 2020, episode and we have your World of Dance recap below. On tonight’s Word of Dance season 4 episode 12 “Finale – Winner Chosen,” as per the NBC synopsis, “In the season four finale of “World of Dance,” the top four acts take the stage for the last time in the “World Final” with judges Jennifer Lopez, Derek Hough, NE-YO and host Scott Evans.

Competing for the title of Best in the World, the judges will score their performances based on their artistry, technique, choreography, creativity, and presentation.”

Geometrie Variable open the show with a dance routine, then MDC 3, Jefferson and Adrianita, Oxygen. Scott Evans comes on stage and welcomes everyone to the World Finals. One act will walk away with one million dollars. The finalists will perform one last time for the judges.

Oxygen is the first to perform.

Judges Comments: Ne-Yo: First a foremost, dope. Super clean lines, beautiful pictures, everything I have come to expect from you guys, thank you for that. I was expecting more from the prop.” Jennifer: “The beginning of the routine was so incredibly strong, even when she laid on the platform and brought her up, you really go the story of Oxygen which is your kind of being the electricity. I love that. The ending was a little flat, but a great routine overall.” Derek: “I saw the detail, I appreciate that. This is a great finale routine. Thank you, guys.”

Judges Comments: Jennifer: “I was watching you and it’s the tricks, it’s the amazing things that you can do, but honestly, it’s the quality of your dance that gave me goosies. It was breathtaking at moments. I applaud your effort, really beautifully done.” Derek: “I just want to point out that floor section, the three of you together completely in synch. That was sick.” Ne-Yo: “There was something over here, you broke off and did something that looked break dance-inspired, I locked it, you were here to play.”

MDC 3 is in the first place and it’s the end of the road for Oxygen.

Jefferson and Adrianita are next, they are the ones who named their son after Derek.

Judges Comments: Derek: “That was so amazing, you didn’t need an audience for that dance. You created so much energy and so much fun, fantastic. That was a great final performance and you both still did things that I have never seen before. You should be so proud, well done.” Ne-Yo: “You made it feel like there were a thousand people in here. My only critique was the first lift was a little clunky, the rest was flawless.” Jennifer: “I loved the performance, I thought it was very strong. I think the stairs hurt you when you went up and down the stairs. Overall really strong.”

MDC 3 is still in the competition, this is the end of the road for Jefferson and Adrianita.

Geometrie Variable is the final dancers to perform.

Judges Comments: Jennifer: “I never would have thought that a group doing what you guys do would make it to the finale. It really is unprecedented for World of Dance to have a really specialized dance in the finale like this.” Derek: “Fantastic, well done. This is a great example of how you guys use a prop and an effect to elevate your performance.” Ne-Yo: “When I first saw you guys I didn’t know that something this stylized and boutique was going to be able to go the distance. I am super proud of you.”

MDC 3 is the winner of World of Dance and takes home a million dollars.