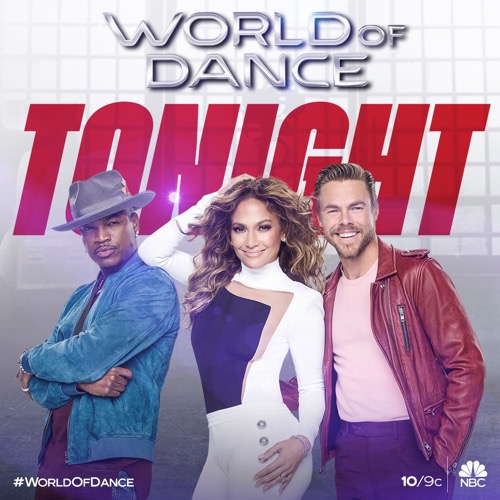 Tonight on NBC the World of Dance’s the fourth season airs with judges Jennifer Lopez, Derek Hough and Ne-Yo with an all-new Tuesday, May 26, 2020, episode and we have your World of Dance recap below. On tonight’s Word of Dance season 4 episode 1 as per the NBC synopsis, “In the season premiere, global superstar Jennifer Lopez, dance phenomenon Derek Hough, and Grammy Award-winning singer and dancer NE-YO join forces once again at the judges’ table in search of the best dance act in the world.

In round one of “The Qualifiers,” the competition gets turned on its head as the judges surprise contestants, who must now first perform in a stripped-down warehouse to prove they have what it takes.”

World of Dance is back for its fourth season. Scott Evans returns as host with judges, Jennifer Lopez, Derek Hough, and Ne-Yo.

The surprise for the contestants is that, they don’t know the judges are there.

Adrianita and Jefferson Y are from Columbia and are a salsa duo. They have been dancing together for 17 years and a romantic couple for 5 years. Thanks to Caleno, they have dedicated their lives to dance. They idolize Derek and have even named their son after him, and hope to meet him in person. They have worked hard for three years for this moment. They arrive on stage and tell Derek that they named their son after him. Jefferson thanks him for inspiring him.

Judges Comments: Ne-Yo: “Slick, tight, you made it look absolutely effortless.” Jennifer: “We had a couple that was world-class and they didn’t win. Your footwork has to be a little bit faster.” Derek: “The tricks that you did were so surprising.” Derek goes on stage with Adrianita. Then Jennifer goes on stage with Jefferson.

Ne-Yo is a yes and so is Derek, they get one more from Jennifer, that is three.

GRVMNT is a hip hop group from Vancouver, Canada. Their dance style is high energy, really sharp. Ben does all the tricks, his friends think he is fearless. They have been together for five years.

Judges Comments: Derek: “Well done guys, that was really good. It was well-rehearsed but there was a moment in there where my energy dropped. I have to think about this.” Ne-Yo: I thought you guys did really well, super strong, and super clean. However when it slowed down, it fell flat for me.” Jennifer: “You have so much that is so clean, but there is another level that you have to get to compete with people who are going to be on this show. You are about 80% there, that 20% more makes you world-class.”

Jake and Chau are surprised to see the judges. The two met at a dance competition and they just clicked. The best part about them is that their communication is so strong.

Judges Comments: Derek: “That was beautiful, stunning and so seamless. I loved the connected choreography, it was fantastic and I really enjoyed it.” Ne-Yo: “A lot of trust and so much chemistry, it as genuine and authentic, quality.” Jennifer: “We are always looking for something new, it was really special.”

Three yes votes to the next round.

The Williams family are four boys age 28 to 21. They have been working as social media influencers for the past few years. Now they want to take what they do on social media and take it to the stage.

Judges Comments: Derek: “I loved the charisma, the look on your faces. It reminded me of a social media fad. In this arena there is a different level of dancing, an attack.” Ne-Yo: “I agree, this is for a million dollars, the strength is there, the skill is there, but now we have to see if it is competition worthy.” Jennifer: “This is an audition and as enjoyable as it was, it has to be clean and tight.”

It is a no from all three judges.

Bailey and Kida are a hip hop duo from Los Angeles, CA. They have a lot of followers on Instagram, Kida has danced with Janet Jackson. Bailey was on The Ellen DeGeneres show and his life went up from there. They have been dancing for a few weeks together.

Judges Comments: Jennifer: “You are great performers, but we can tell you haven’t danced together for a long time. But you are both great dancers, and it is really to have something super duper special when you dance together. You have respect for each other, now you have to fall in love with dancing together.” Derek: “It is kind of like a chemistry thing, vibing off each other, I think that will come with time.” Ne-Yo: “I like what you guys brought today.”

It is a yes vote from all three judges.

Savannah Manzel is 9 years old and she is a jazz dancer from Lake Elmo, MN. When she was little she had so much energy that her mom put her in a dance class. Her mommy won’t let her buy a puppy, but if she wins a million dollars she will buy it.

Judges Comments: Jennifer: “You look like you have been rehearsing for that for fifteen years. You are a pretty amazing dancer, strong, athletic, a beautiful face that light up the room.” Derek: “I am calling my nieces now and telling them to step it up because Savannah was here.” Ne-Yo: “I have no words, the level was way above your years on this planet.”

It is a yes vote from all three judges.