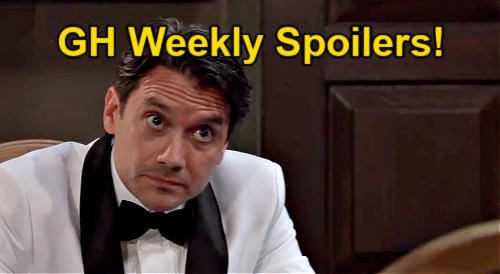 GH spoilers reveal that Dante and Sam McCall (Kelly Monaco) keep going back and forth. There are times when they keep their dynamic platonic, then other times they start to cross that line from friendship to romance.

In the weekly preview, Dante is wearing a black tuxedo when Sam enters the room in a black strapless dress. Dante is blown away and tells Sam that she is dressed to kill.

The preview also confirms that Ava Jerome Cassadine (Maura West) will demand to know what is going on. Nikolas Cassadine (Marcus Coloma) appears conflicted as to what to say.

Meanwhile, Spencer Cassadine (Nicholas Alexander Chavez) looks down at the floor with his arms crossed. It is teased that Ava will finally meet her stalker but what will happen after she learns the truth?

General Hospital spoilers reveal that Nina will be publicly confronted by Michael. While out having dinner and a drink with Curtis Ashford (Donnell Turner), Michael storms up to their table.

Michael demands an explanation from Nina. It is teased that Nina will have to pay the price.

Nina has been expecting the truth to come out at some point and knows she could lose Wiley Quartermaine-Corinthos (Kyler and Caleb Ends). How will Nina explain her actions and will she end up losing access to her grandson?

However, Nina is not the only person that will be confronted about her romantic deception.

During the week of October 4, Carly will confront her husband about some startling information she’s discovered.

In the preview, Carly tells Sonny that she knows that Nina kept the truth about Sonny hidden for nine months.

As Sonny patiently listens, Carly says that she knows why Nina kept the truth about Sonny from his family and friends.

How will Sonny respond to Carly’s confrontation and what will his excuse be for protecting Nina?

Will Sonny be able to explain why he didn’t tell Carly the whole truth and could it drive a wedge or even end his marriage? We will have to keep watching the ABC soap to find out what happens next.

Be sure to catch up on everything happening with GH right now.

Come back to CDL often for General Hospital spoilers, news and updates.

“My god… you look like you’re dressed to kill.” #GH pic.twitter.com/dPZhUZz2ty