The Bold and the Beautiful Spoilers: Katie’s Red Flag – Carter & Paris Get Too Close? 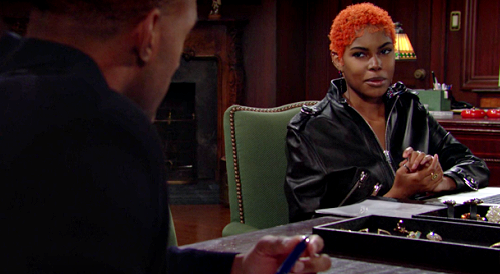 The Bold and the Beautiful (B&B) spoilers tease that Katie Logan (Heather Tom) could face a red flag as Carter Walton (Lawrence Saint-Victor) and Paris Buckingham (Diamond White) get too close. Will Bill Spencer’s (Don Diamont) second choice fear history will repeat itself?

B&B fans know Katie is fed up with coming in second place and wants a man who’ll be committed to only her. That’s something Katie and Carter have been able to bond over, so it’s led to some cute flirting and heart eyes.

There’s the potential for a new romance where they put each other first, but Katie could soon have a reason to be concerned about Carter’s loyalty. Paris and Carter’s bond is certainly something to keep an eye on here.

On the November 18 episode, Carter reminded Paris that he’d be there for her as a friend if she ever needed to talk.

The two of them had a sweet conversation where Carter showed he was a caring pal. Friendship is all Carter and Paris have right now, but this could build to Katie getting the wrong idea.

During the week of November 22-26, Paris will run to Carter with a problem on her mind.

Since Paris will be shaken up over Thomas Forrester’s (Matthew Atkinson) romantic surprise and declaration of his feelings, she’ll need someone to talk to and will take Carter up on his offer.

Paris and Carter’s bond is innocent enough, but Katie is sensitive when it comes to betrayals.

Katie might see the possibility of one coming from a mile away if she catches Carter and Paris in a close, intense moment.

So far, B&B is playing Carter and Paris’ connection as platonic. Whether that might change or not doesn’t really matter just yet.

It’s all about how Katie will perceive this connection – and she may not like what she sees since she’s haunted by her history with Bill and times when he betrayed her with Brooke Forrester (Katherine Kelly Lang).

Katie might worry that if she gets with Carter, he’s just going to fall for Paris behind her back and break her heart.

Meanwhile, Carter may actually go to Paris for help pursuing Katie! In the end, Carter may have to convince Katie that he’s not Bill and can give her the 100-percent devotion she needs.

The Bold and the Beautiful spoilers say Carter and Katie’s future could be bright, but only if they can move past old insecurities and learn to trust each other.

CDL’s where you want to be for hot Bold and the Beautiful spoilers, news and updates, so stop by often.