The Bold and the Beautiful Spoilers: Monday, October 14 – Brooke Rips Into Shauna – Assures Her That Flo Will Never Be Redeemed

BY hellodrdavis on October 11, 2019 | Comments: one comment
Related : Soap Opera, Spoiler, Television, The Bold and the Beautiful 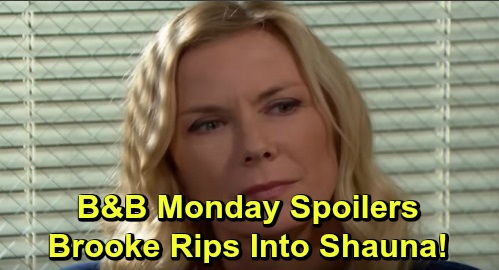 The Bold and the Beautiful spoilers for Monday, October 14, tease that Katie Logan (Heather Tom) and her family will be completely stunned. As B&B viewers know, Katie and her sisters have just found out that Flo Fulton (Katrina Bowden) was Katie’s (previously) anonymous kidney donor. It was a huge scene as Shauna Fulton (Denise Richards) came into Katie’s room, then Flo was wheeled in as a big reveal. And on Monday, everyone will react, but in very different ways.

According to B&B spoilers, Katie will be initially shocked by the reveal, but she’ll find herself having conflicting emotions. On the one hand, she’s still horrified by what Flo did to her niece Hope Logan (Annika Noelle). She won’t be able to just forget that Flo kept Beth Spencer’s (River Davidson and Madeline Valdez) existence a secret from Hope and Liam Spencer (Scott Clifton) for months on end. But Katie will also realize that Flo is the reason that she’s alive and will be there for Will Spencer (Finnegan George) in the years to come.

In the end, it appears that Katie will embrace her gratitude for Flo, and she’ll acknowledge the tremendous sacrifice that Flo has made for her. Now, whether Bill Spencer (Don Diamont) will feel the same level of gratitude remains to be seen – B&B viewers will remember that Bill and Will haven’t yet learned who Katie’s donor is yet. That will surely come on Monday’s episode, and we’ll see how Bill reacts to the news. It will surely come as a huge shock.

But while Katie expresses gratitude for Flo’s sacrifice, Brooke Forrester (Katherine Kelly Lang) will be feeling a different set of emotions. Sure, she’ll feel some gratitude toward Flo on some level – after all, her sister is going to live because of what Flo did – but she’ll feel quite angry when it comes to Shauna. According to B&B spoilers, Brooke will lash out at Shauna over the whole thing.

Of course, this conversation will likely happen privately, outside of Katie’s awareness, since it will be a contentious one. Brooke will lay into Shauna and accuse her of using the situation to try to make nice with the Logan family. Brooke knows how much Shauna wants Flo to be redeemed within the family, and she’ll think that Shauna encouraged Flo to donate her kidney to reclaim her standing with the Logan sisters.

In fact, Brooke will probably let Shauna know in no uncertain terms that Flo will never be redeemed in her eyes, and that neither she nor Flo will ever be accepted back into the Logan family. Brooke is still angry with Shauna over the night she spent with Ridge Forrester (Thorsten Kaye), so some of her anger over that situation will probably be displaced a bit.

At any rate, it looks like Brooke is really going to antagonize Shauna and question her motives…rather than just being happy that Katie’s life was saved. And knowing Shauna, she’ll probably give back as good as she gets, so we should see quite a scene here.