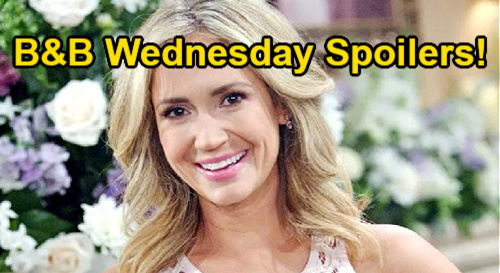 The Bold and the Beautiful spoilers for Wednesday, February 17, tease that Steffy Forrester (Jacqueline MacInnes Wood) and John “Finn” Finnegan (Tanner Novlan) will continue their emotional conversation at the cliff house.

As B&B viewers are aware, Finn’s dreams are shattered now that he knows that Liam Spencer (Scott Clifton) is the father of Steffy’s baby.

Finn has been talking as if this is the end of the relationship, and Steffy is terribly scared. Of course, this is a very difficult situation for everyone involved, and Finn may be reevaluating whether he wants to stay in the relationship with Steffy.

Steffy is in the process of pleading with Finn to stay, and B&B viewers should get to see how this plays out on Wednesday’s episode.

Meanwhile, over at the cabin, Hope Spencer (Annika Noelle) has just been telling Liam that the idea of them staying together and raising their family is kaput now that he and Steffy are having another child together.

Liam is fighting to save his marriage any way that he can, and Hope is on the verge of a major meltdown, which will apparently happen on Wednesday’s episode.

Next, on the new episode of B&B on Wednesday, February 17, Thomas Forrester (Matthew Atkinson) will continue his talk with Vinny Walker (Joe LoCicero) over at Forrester Creations.

Vinny has been trying to not-so-gently push Thomas to see that things would be great for him if Liam is the father of Steffy’s baby. Of course, Thomas hasn’t yet heard the paternity test outcome, so it’s still up in the air as far as he’s concerned.

But what about Vinny? As B&B viewers know, Vinny walked into the CEO office carrying a white lab coat over his arm and complaining about his demanding new job…which just might be at the same hospital where Steffy’s paternity test was run.

We’ll see what happens with that, but we’d say there’s a good chance that Vinny had something to do with switching the paternity test results.

This would mesh with spoilers for Wednesday’s B&B episode indicating that Vinny will try to persuade Thomas that if Liam’s the father, then he can have an opening to win Hope back.

But Thomas will make it clear to Vinny that Hope’s happiness is paramount to him, and he’ll point out that Hope wants a family with Liam and that it would be better if Finn was the father of Steffy’s baby.

Finally, a familiar face will make an appearance on the Bold and the Beautiful, as Dr. Bridget Forrester (Ashley Jones) comes home to Los Angeles. It looks like Bridget may be in town for a medical conference, and that she’ll come home to see her mom, Brooke Forrester (Katherine Kelly Lang).

This means that Bridget may be present to hear the results of the paternity test as well.

It sounds like a lot of B&B drama is heating up for Wednesday’s episode, so stay tuned! Stick with the CBS soap and don’t forget to check CDL regularly for the latest Bold and the Beautiful spoilers, daily episode recaps, and news.