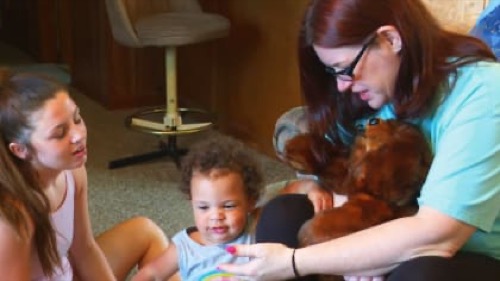 Tonight on TLC their reality show looking at teenage pregnancy and parenthood UNEXPECTED airs with an all-new Monday, April 12, 2021 episode and we have your Unexpected recap below.  On tonight’s Unexpected season 4 episode 12 called, “Not Ready for Another Baby,” as per the TLC synopsis, “Myrka struggles with breastfeeding; Julie reveals some shocking news; Lilly and Lawrence announce their engagement to their families.

Matt worries Aden doesn’t have what it takes to support Jenna in the delivery room.”

So make sure to tune in tonight between 10 PM – 11 PM ET for our Unexpected recap.  While you wait for our recap make sure to check out all our television spoilers, news, recaps, and more, here!

In tonight’s episode of Unexpected, Lilly and Lawrence did a photoshoot on their babymoon. Lilly wanted to celebrate her pregnancy and so she did one of those prenatal photoshoots where she got to show off her baby bump. However, while they were out in the field of sunflowers, Lawrence got down on one knee and he proposed. Lilly was so shocked that she said “yes” and then “no way”. The “no way” wasn’t a rejection. It was just her reacting to be so shocked and she didn’t even care the ring couldn’t fit on her fingers. She forced it on because she wanted to wear it for the rest of the photoshoot. The photographer captured the first moments of their engagement and so they were celebrating both their baby and now their engagement. And what made it extra special was it being her birthday.

Lawrence did a great job of keeping it a secret. He asked her parents for their blessing before he proposed and Lilly was so later so happy that she said it was great they got engaged before the baby came. Lawrence had been hoping they could get married before the baby came, but Lilly shot that down. She said they needed time to save up enough money for a wedding and that they didn’t have time to do it all before the baby was coming. Lilly was also rather touchy around this time. She told Lawrence he couldn’t take the proposal back and she asked a lot of questions about how he was able to surprise her. Lilly was heavily pregnant. She was hormonal and she was often looking for a fight. And Lawrence wasn’t giving her one.

Myrka and Ethan had their baby. The teenagers were alone with the hospital staff when the baby was born because of Covid-19 rules at the hospital and so they didn’t know how hard a newborn was going to be until they got home. Myrka had problems with breastfeeding. Her daughter Attalie had problems with latching. She sometimes couldn’t latch on and so she would cry because she was hungry. Which in turn sadden Myrka. She doesn’t know how to help her baby because her baby is too young to understand direction and she’s often trying to put her own nipple in the baby’s mouth. Ethan tried to be helpful. He would watch the baby but he couldn’t feed her and so Myrka often felt like a failure when breastfeeding didn’t work.

Tyra and Alex didn’t need to worry about breastfeeding because their baby was a year old. Their daughter Layla was a toddler and so the only baby they have to worry about is the one Alex’s mother is pregnant. Alex’s mother is pregnant. She thought it was Covid-19 and she went to the hospital to get tested, but it turns out she wasn’t sick. She was pregnant. His mother is having a baby and that was going to make things tight around the house. Alex and his mother didn’t seem to work. It was grandmother Patricia that was working. She became very upset when she found out her daughter was pregnant because she had to raise Alex after her daughter Julia proved unwilling to take care of him and another baby was a financial burden.

Julie didn’t see it that way. She saw this as her chance at finally getting to be a parent and she knows that there might be strife with Alex when he sees this baby get the attention he never did from their mother. Only Alex wasn’t confrontational. He never told anyone what he was thinking and that’s why he hasn’t talked to Tyra about her transferring schools. She wants to transfer schools to be closer to him and their daughter. She wants to make her relationship work with Alex and he was over it. His grandmother even suspected he was cheating on Tyra while she was away at college and so the only person who didn’t know was Tyra. She thought Alex still loved her. She also thought he would be happy about her being closer to home and so he was telling her one thing while telling the cameras something else.

Lawrence and Lilly came back from their babymoon to find both of their families waiting for them. The families all wanted to know how the proposal went and Lilly’s family was hoping for a long engagement. Lilly and Lawrence haven’t known each other for long. They also were about to have a baby and babies can change things. Lilly’s parents wanted the young couple to have a long engagement to see how they handle being new parents together. Only someone made a joke about the young couple moving out. Lilly lives with her parents and her toddler daughter and so she wasn’t quite eager to leave because she knew she was going to need help with the new baby while Lawrence couldn’t wait for them to get a place on their own.

Myrka’s breastfeeding woes continued after Ethan’s mom suggested formula. Myrka told Ethan’s mom that she wasn’t sure the baby was feeding as much as she needed to and so the formula was suggested. A baby bottle was made for the newborn. She tried out the formula for the first time and she was so happy that she was making happy noises. It was the noises that got to Myrka. She had just delivered her baby and already she felt like her baby was rejecting her. Attalie struggled with taking breast milk. Myrka had no idea how to fix this and to make things worst her mother came over. Myrka’s mother has been unsupportive throughout her entire pregnancy. The woman lives to be critical with Myrka and so a visit from Liliana was like adding gasoline to a raging fire.

Jenna meanwhile was in labor. The hospital she had her baby in was also strict about Covid rules and so it was just her and her boyfriend Aden. Aden was on the phone for most of it. He didn’t realize what was going on until Jenna began feeling pain. She didn’t start feeling pain until after she had her epidural and that’s when it became real for both her and her boyfriend. The teenagers didn’t know what to do once the baby began its journey.