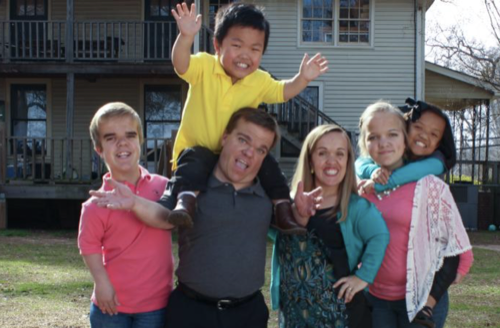 Liz heads to Nashville for a girls’ weekend, but three little women out on the town draws unwanted attention. Alex gets an exciting opportunity.”

In tonight’s 7 Little Trent’s snoring has gotten worse lately. It was now keeping Amber up at night. She tried to talk to him about it and he didn’t really want to hear it. But a lot of little people struggle with sleep apnea. They do so because their faces were dwarfed and their organs and tissue were actually regular-sized. Trent’s family also has a history of sleep apnea. He had a brother who died from it. His wife can hear him stop breathing when she hears the snoring and it suddenly stops or pauses until she checks on him to get him to breathe again.

Trent has to at least do something about that if not the snoring. He has to see a professional about it. He needs to get treatment for it. He needed to be willing to accept help and that was the hardest part for Trent. When he wasn’t struggling with that, he was checking on the kids. Their son Alex has figured out what he wants to do as an adult. He wants to go into broadcasting and potentially be a news anchor. Alex has done research into this chosen career path. He knows that there aren’t really little people in media and yet he wants to do it anyways. He was very happy with his choice. He even did pretend broadcasting with his mother.

Elizabeth meanwhile went on a little trip with her friends. They decided to take the car and go to Nashville, Tennessee. The young ladies had never been there before. They were happy that they could go now and have it without any kind of parental supervision. And the trip itself was great. They got lucky when they went shopping for cowboy boots because they managed to fit into an adult-size four when typically they would have to get children’s shoes in order to fit their smaller size. They also went sightseeing. Nashville was a beautiful city. It had a lot to offer and the girls saw everything.

Back at home, Amber was being creative in finding ways to help Trent. She found out that blowing a horn actually helps people expand their airways and it helps them sleep at night without snoring. Trent tried it. He wasn’t really good at it. He struggled with playing the horn because it would come out as a half-hearted blow while Amber was actually better at it than him. She would blow into it and it would sound like a horn on a boat. Trent would try it, but it would sound like someone failing to blow a raspberry. Only it was supposed to help. People have been doing it for centuries and so Trent continued to try and blow the horn.

Trent was still trying even as Alex sought out Jonah for advice. Alex normally went to his dad for advice because his dad was always on hand and so he got lucky when Jonah moved back home. The two brothers are very similar. They have similar interests. They also got to spend more time together once Jonah moved back. Alex talked to Jonah about his potential career in broadcasting. They went out and took the drone for a spin. They spent quality time together and Jonah even repeated the story of how he got a brother. Jonah was pretty young when his parents basically said they were done with having children.

But they talked about adoption. Jonah realized that when they brought one of his sisters home and so he put in a request for a brother because he always wanted a brother and that’s how they came to adopt Alex. Now, Jonah and Alex are super close. They have a great bond. Alex talked to his brothers about his dreams and hopes for the future and Jonah did nothing but encourage him. He wants his brother to be happy. He didn’t feel the need to point out any downsides. He left that part up to his parents. Not that his parents were Debby Downers. They were too busy trying to get Trent to stop snoring.

The horn didn’t work. It didn’t matter how long Trent tried it. It just didn’t work for him and so Amber got him this belt to wear to bed that was supposed to help with snoring and that didn’t work either because Trent said he could barely sleep in that thing. It was like someone was squeezing him tight around the waist in a bear hug. Trent hated the thing. He was fine with going back to snoring because then at least his wife would know when he stopped breathing and wake him up. Trent doesn’t take his sleep issues seriously. He even accused Amber of not loving him as much as before because now she was complaining about his snoring.

Amber reassured him that she does still him. She just wants to be able to sleep now and so Trent agreed to try out things to help get rid of the snoring.

As for Elizabeth, she returned from her girl’s trip happy and she was more set than ever to move in with her boyfriend. She even thought talking to his parents would help get them on board. And so that’s what she planned for.